In the previous installment of my little travel series I walked you through our first day in Rome. Today's post will be about our second day in Rome. 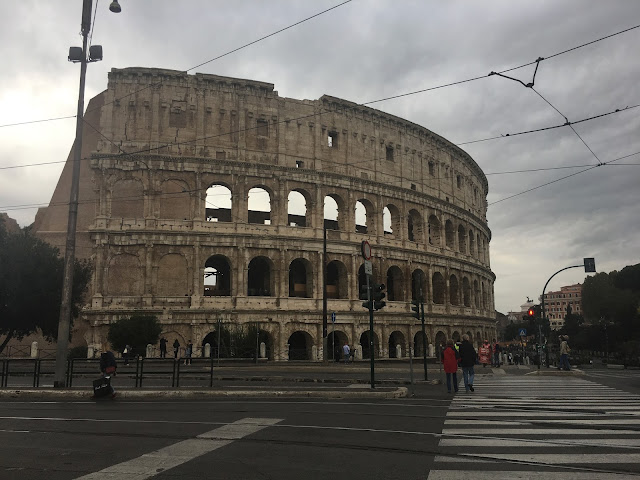 We meant to be up early and be out and about before the Italians finished their first cappuccinos of the day, but we spent time enjoying our delicious B&B breakfast and talking to our host. The breakfast consisted of croissants (or cornetto as it's called in Italian) with little jam tubs and Nutella, cold meats, cheese, melba toast, normal toast, fruit juice, fruit yogurt, and sweet strawberry pastries. We could also choose between espresso and cappuccino (cappuccino is considered a breakfast drink in Italy). We took little packaged biscuit things for later which turned out to be tiramisu in cake form, delicious! 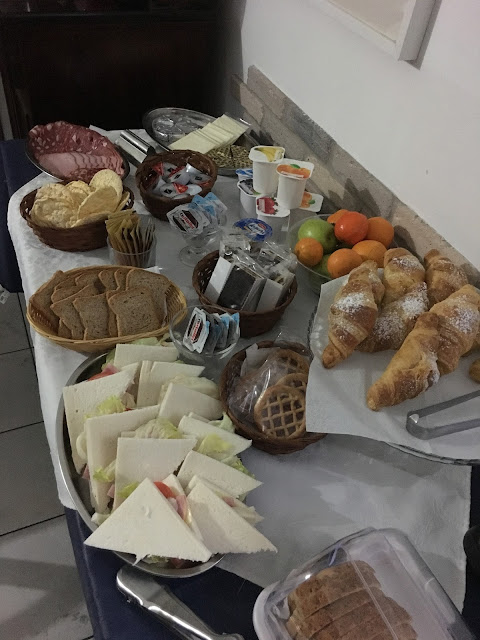 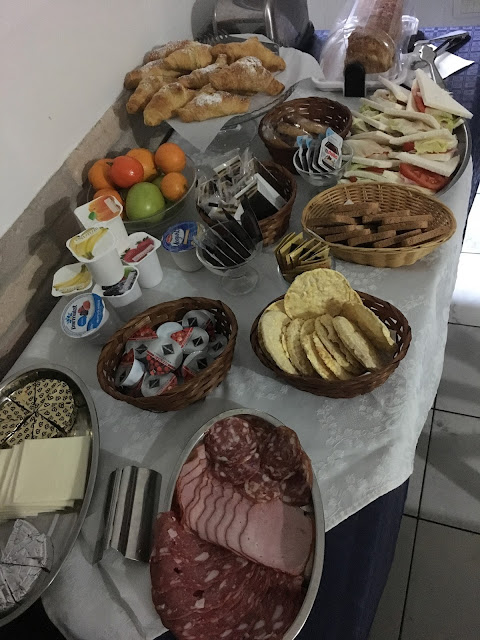 After that we set off to the Colosseum. When we got there the line for tickets was all the way around the Colosseum - we literally took the last possible spot in the line. The one thing that frustrates me about Rome is the number of hawkers and "tour guides" trying to pressurise you into either buying something or signing up for their "tours". When we got to the Colosseum every one of them told us we were going to be standing in that queue for three hours and if we pay them 20 euros (the normal entry ticket for the Colosseum is something like 12 euros), we can skip the line and go on their tour. I told the husband I'm setting my stop watch, let's see how fast the line moves in half an hour: if we haven't moved by then we go do something else. I'm so glad we did that as the line moved quite fast, and there's so much to look at while standing in the queue. Plus, no one else around us spoke Afrikaans so we could gossip about whatever we liked! Ultimately it took us an hour to get from the last spot in line to going in and requesting our tickets, so I'd definitely say don't despair if the line looks long! In Italy they're also very sensitive when it comes to the safety of pregnant women - all the museums and big monuments have X-ray scanners and/or metal detectors and I didn't have to go through any of them. I just took off my parka and put it on the conveyer belt and waved to get the security guard's attention. When I got his attention I just pointed to my bump and he would mimic my gesture and tell me to come round the side. I didn't have a moment's trouble and all the guards were always very nice and polite. 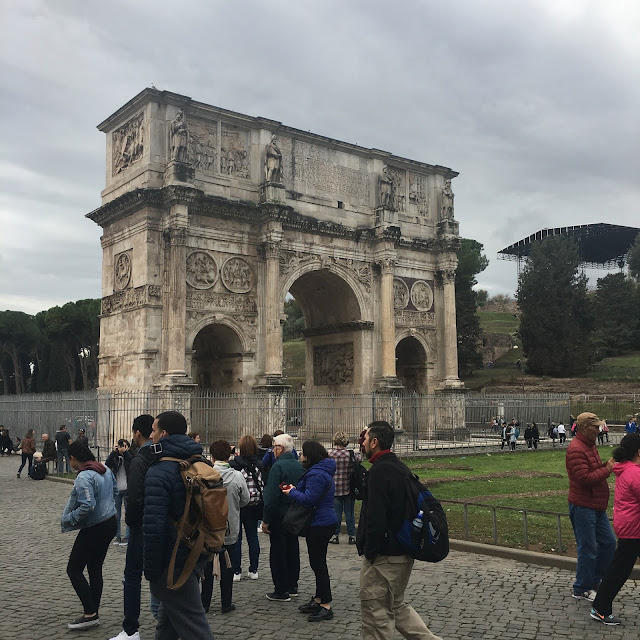 The Colosseum itself is impressive and I still want to go read up on it: the Roman history is absolutely fascinating and there's so much of the architecture that remains until this day. I could go on and on about the Colosseum, but I'll rather just show you pretty pictures. 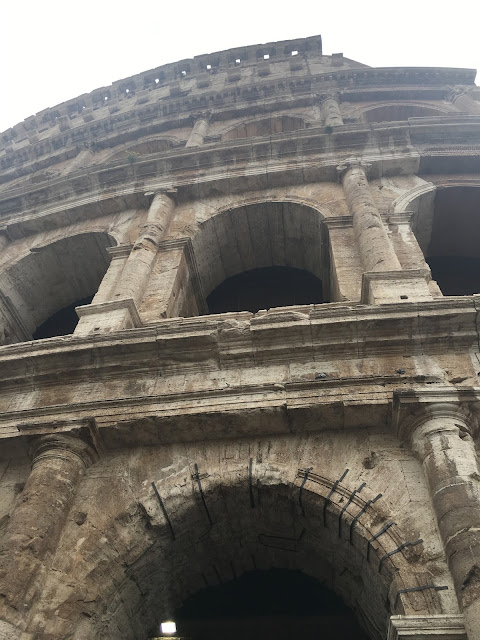 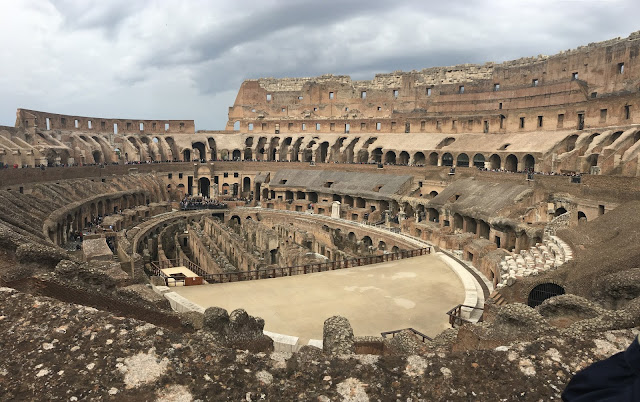 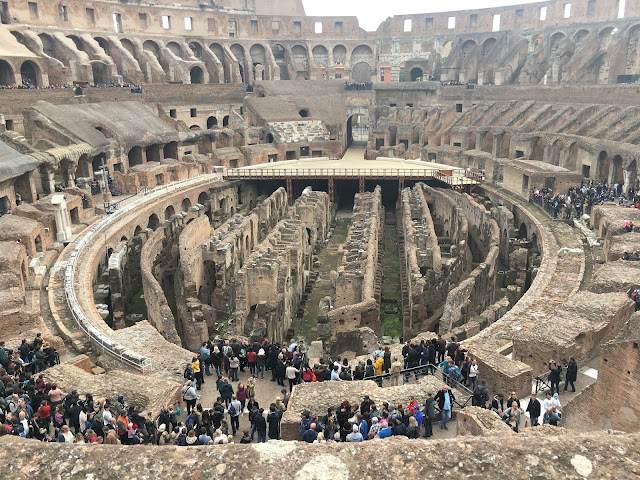 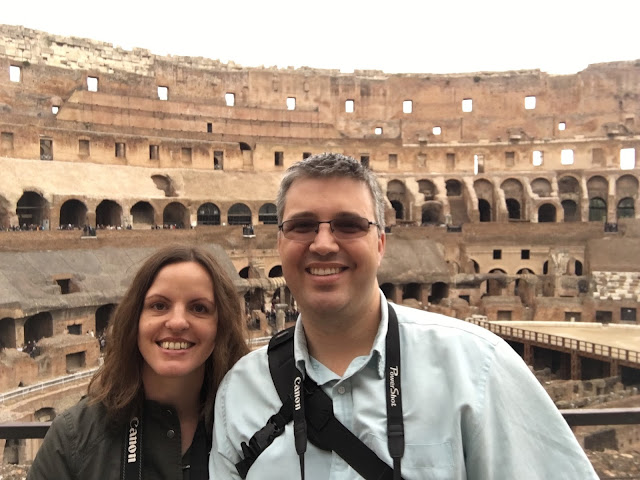 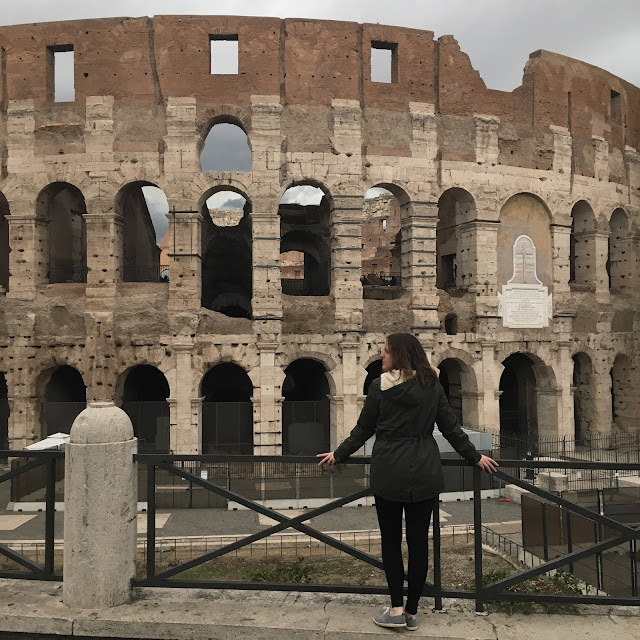 Being Afrikaans and South African my husband was probably the only person in Rome wearing a short-sleeved shirt and shorts, and there was a thunderstorm brewing. When we were almost done in the Colosseum we could hear thunder coming closer. We decided to go back to the B&B so that he could put on some warm clothes as well as have lunch, and then we would tackle the Roman Forum and the Palatine Hills that were just across from the Colosseum and were included in the ticket. We had lunch at a little cafe meters from our B&B and when we got to the B&B it wasn't even 10 minutes before the thunder started cracking and it started pouring with rain. We used the 90 minute opportunity to catch up on some much-needed sleep. At about 16:30 the weather cleared up and we set out again. Now, since it's almost the end of autumn in Europe the sun sets at around 17:00, but it gets dark a bit earlier when the weather is overcast. That doesn't stop the Italians from going about their business and I was thankful as there was still a lot I would like to see.

We decided to tackle two churches, the first one close to the Pantheon (Santa Maria Sopra Minerva) and the second one in a neighbourhood called Trastevere (Santa Maria in Trastevere). The Santa Maria Sopra Minerva church is beautiful but we weren't allowed to take photos so we just snuck around admiring the beautiful architecture and decor. We then took the tram to Trastevere (at last we figured out that a metro ticket bought you one ride on the metro or 90 minutes' worth of tram and bus rides). I didn't really know anything about Trastevere until I read Cindy's travel series and I'm so glad I did! It's quite different to the rest of Rome and I find that the vibe is more relaxed and less touristy. The Santa Maria church is absolutely beautiful. The ceiling had the most unbelievable artwork and I still think back to that beautiful old church. 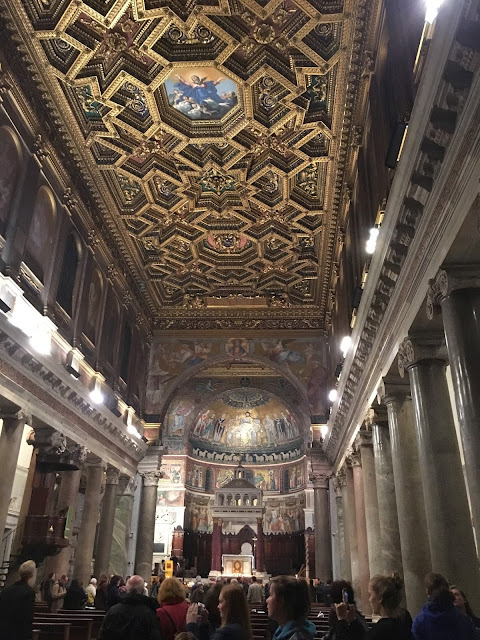 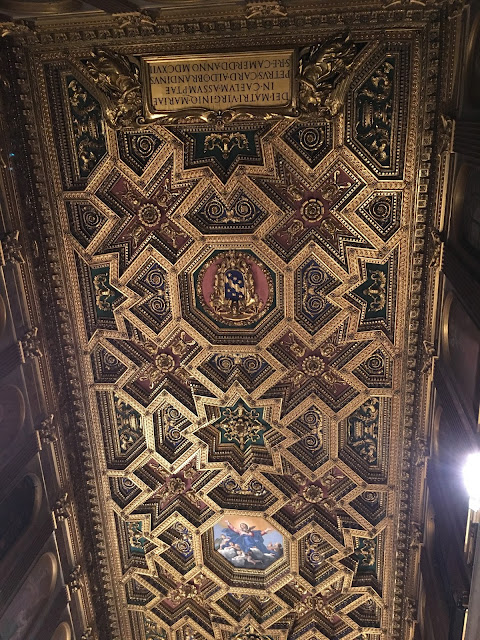 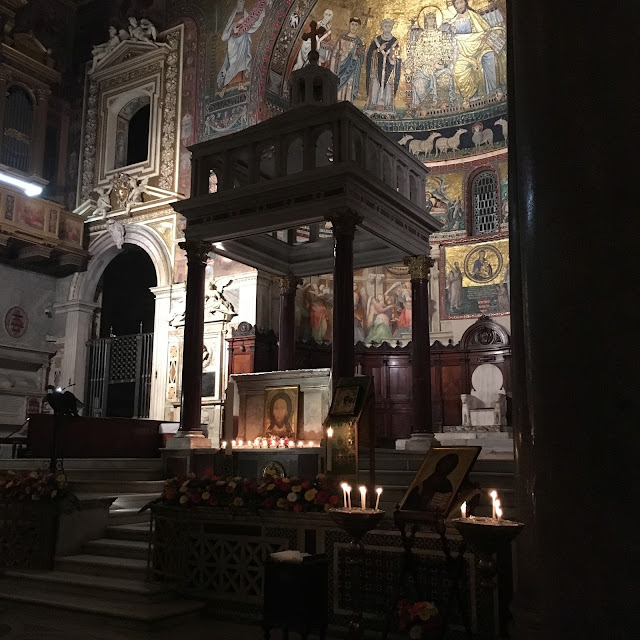 After the busy day we had we wanted somewhere nice to eat, just to relax. There are a lot of restaurants situated along this one street and we went back and forth, trying to decide where to eat. In Italy, and in some other European countries I've been in, they put the menus on display outside the restaurant so that you can browse the menu in peace, without feeling obligated to go eat somewhere just because you read their menu. We settled on Ombre Rosso which had a nice homely vibe. The place was packed (a good sign), the menu looked good and unpretentious, and the tables outside had little lanterns and everything just looked cosy and intimate. We had a lovely waitress and the food was delicious. We ate a bit too much, but oh well, when in Rome, eh? We started with the bruschetta and then moved on to a form of pizza called a pinsa (it's leavened dough that's baked like a pizza base, but the toppings are raw and put on afterwards). They were also one of the only places I saw where you could order tap water - and it was free! I was parched and happily drank the free tap water. The water in Rome is totally safe to drink, not once did I get a tummy ache and I'm normally quite sensitive to a big change in diet (even if it's just drinking water). When the bill arrived she also gave us each a shot of Limoncello. I had a liiiiiiitle taste, just to say that I had Limoncello in Italy, and I was a bit sad that I couldn't finish it. Oh well, next time! 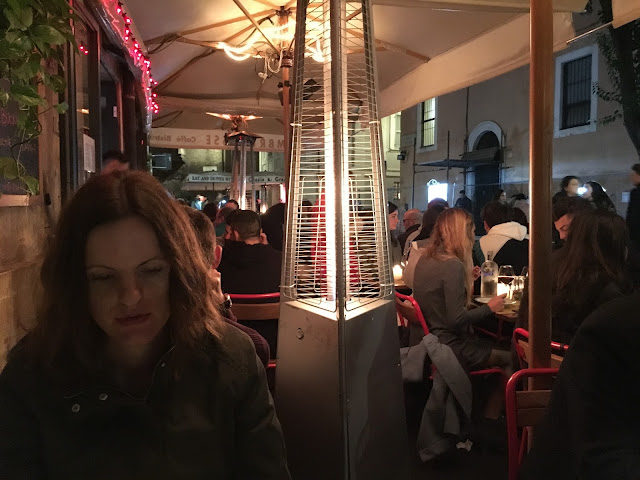 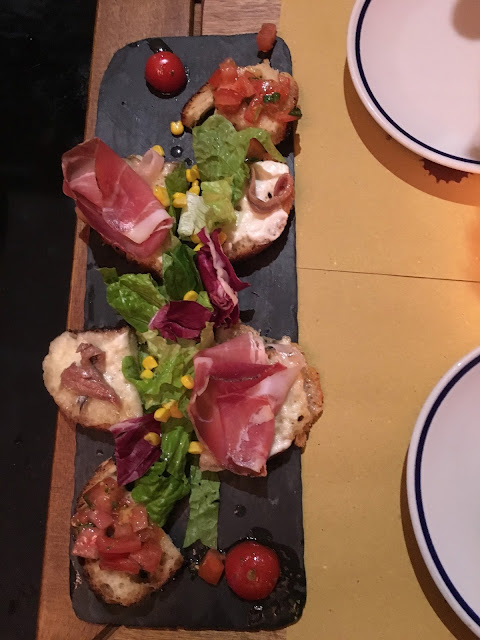 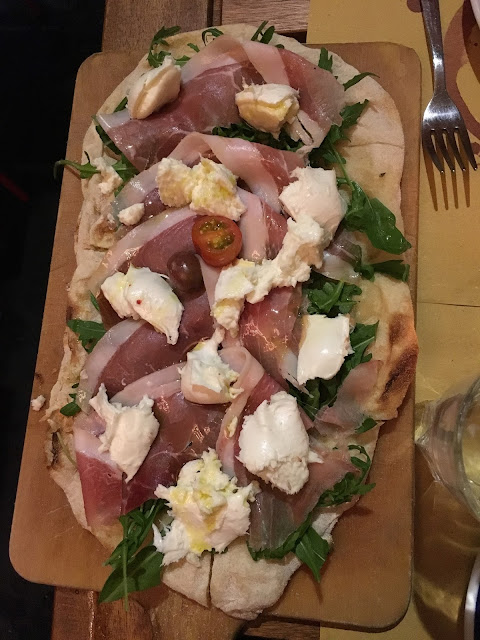 After that we took the tram back to our B&B and started packing up, only leaving out the things that we would need the next morning.

This was the end of day two, stay tuned for more installments in the travel series!