The husband and I are back from an incredible eight-day trip to Italy. Since then we've had a 20 week prenatal scan, a clogged kitchen drain, a broken (electrical) front gate, sore throats, colds, my mom visiting, and the husband's birthday (all in the same week, roughly six days). To say we're back with a bang is an understatement! I actually prefer to be this busy as it takes my mind off of the fact that the holiday is over and it's back to work and back to reality...

I took hundreds of photos with my SLR camera and with my phone (I tried to photograph everything twice - one photo with the SLR and one photo with the phone), but I'll only use my phone photos on the blog as I'm not really that keen to sift through hundreds of photos of the same things. The sad thing is that, apart from the lenses, my phone actually takes prettier pictures than my SLR! 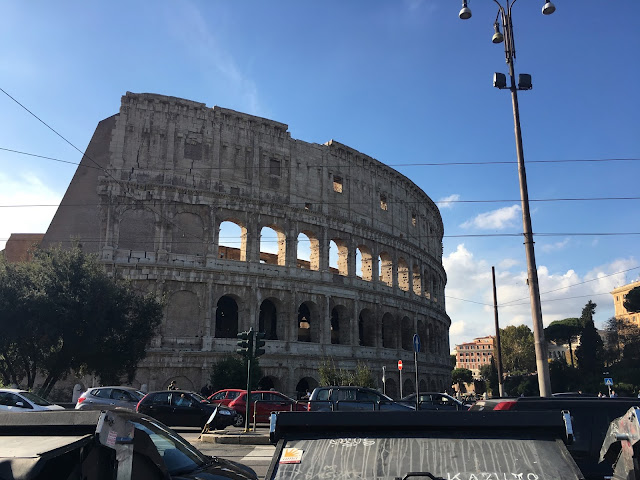 Early Saturday morning on Frankfurt airport I perused the duty-free shops. I was like a little kid in a candy shop, but I managed to not buy anything as I wanted to compare prices with places like Sephora (and the drugstore for some items).  Below you can see the beautiful Clarins holiday packaging, the drool-worthy Dr. Jart+ stand, and the Lipstick Queen stand. 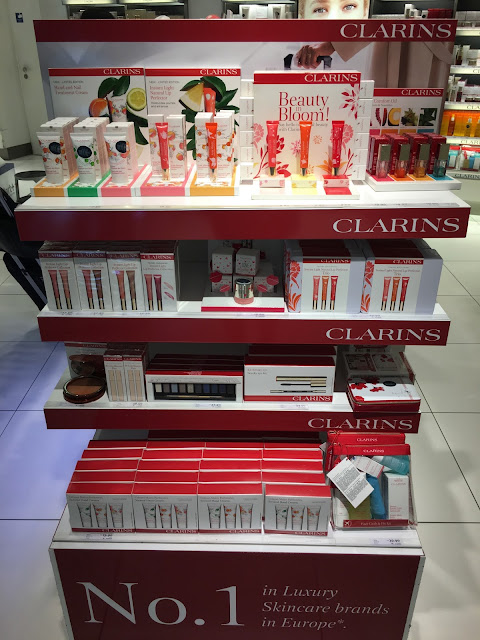 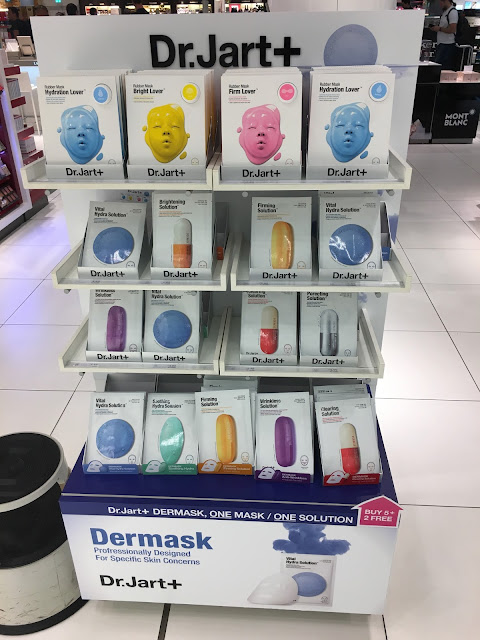 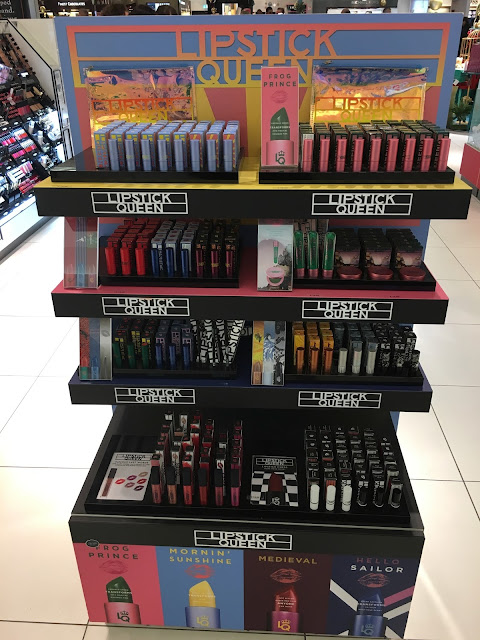 After our second flight we arrived in Rome around 9:00 am and had to figure out how to use the public transport. Luckily I downloaded the Google Maps for Rome, Florence, and Venice beforehand so I could use them offline (let me know if you would like to know how!). I also made notes beforehand of the stations closest to our B&B so that we didn't have to faff too much while standing in the airport. We took an express train from the airport to Rome and arrived about half an hour later in the city. From there we took the Metro to the closest station to our B&B. We found our B&B and was greeted by our lovely hostess Monika. The Italians really are a bunch of beautiful people and Monika looks like she might have stepped out of a women's magazine to welcome us to Rome. She really is a lovely host and I can highly recommend her B&B called "Obelus" (I found her on Booking.com). The B&B is about 1.4 km walk from the Colosseum and is 300 m to the closest metro (Manzoni). It's an apartment in a very nondescript building - there are three rooms (each with their own bathroom), a small kitchen, and a small dining area. 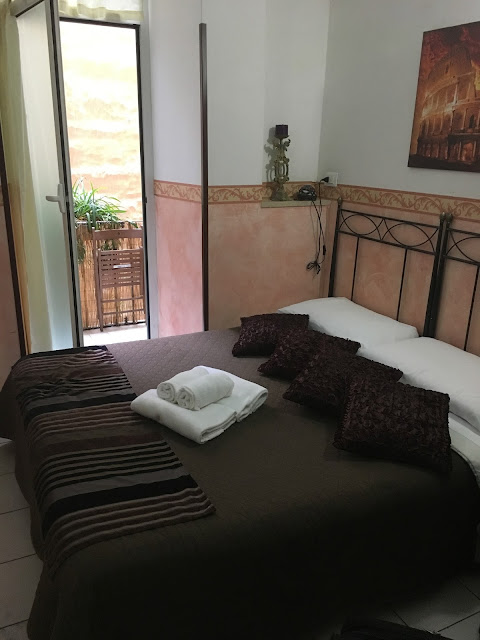 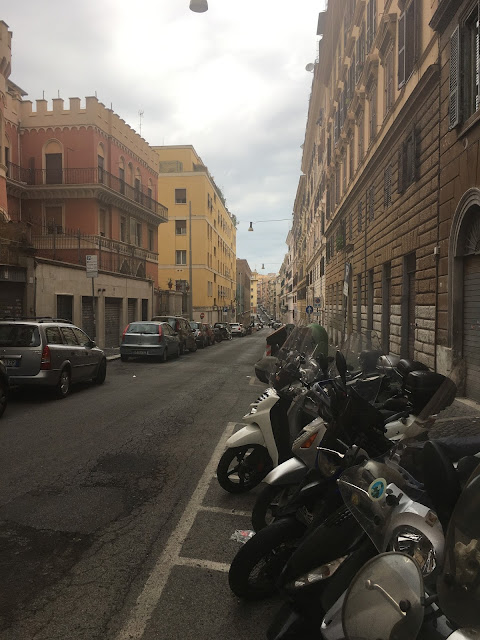 After checking in we were given a map (with pictures!) so that we could plan our routes and familiarise ourselves with Rome. We planned on going to the Colosseum the next day as the entry is free on the first Sunday of every month (this is a thing in Europe). So we packed our camera bags and set off on foot to explore. Seeing the Colosseum for the first time is such an incredible experience: here you are walking along streets admiring the architecture when boom, suddenly the Colosseum just appears in front of you. It's literally in the middle of the suburb, but that's how most of the statues and monuments in Rome are - they built the city around the monuments.  You really don't have to walk far before you see something unique, super old, and full of history. 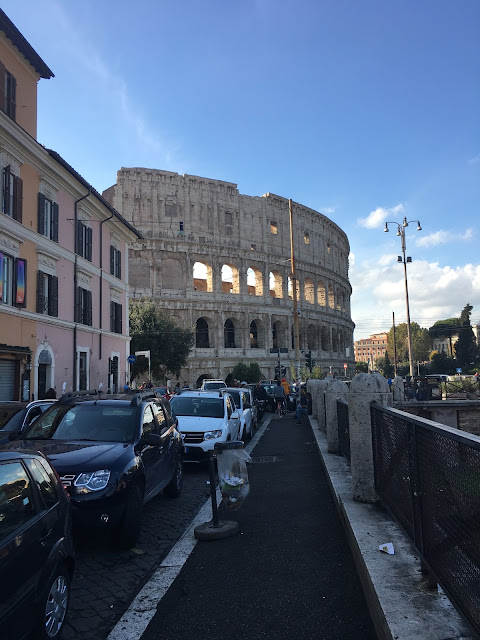 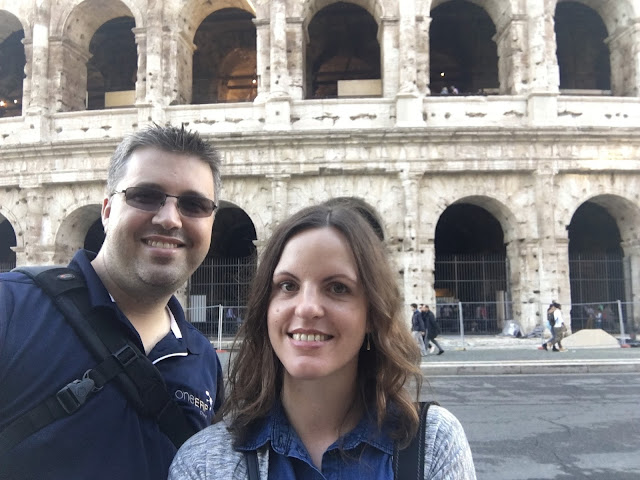 Our first lunch consisted of toasted sandwiches and water. Since I'm pregnant I was a bit scared of what I was eating, but later on I relaxed and decided to just go with the flow. They also have food standards in Italy, and if it looks fresh and it looks good, then I'm eating it. I didn't have any alcohol, but apart from that I wasn't too fussed with what I could and couldn't eat. Trying to ask someone who doesn't speak the same language as you if the cheese you are eating is made from pasteurised milk, or in what conditions the cold meats were kept was just a conversation I was not willing to have. I tried to make good decisions, but it was more important for me to enjoy myself and not stress about things that might not happen (such as getting food poisoning or worse). I also drank coffee, one day with reckless abandon (three cups, oops), but, I enjoyed it and I tried to just make better choices after that. 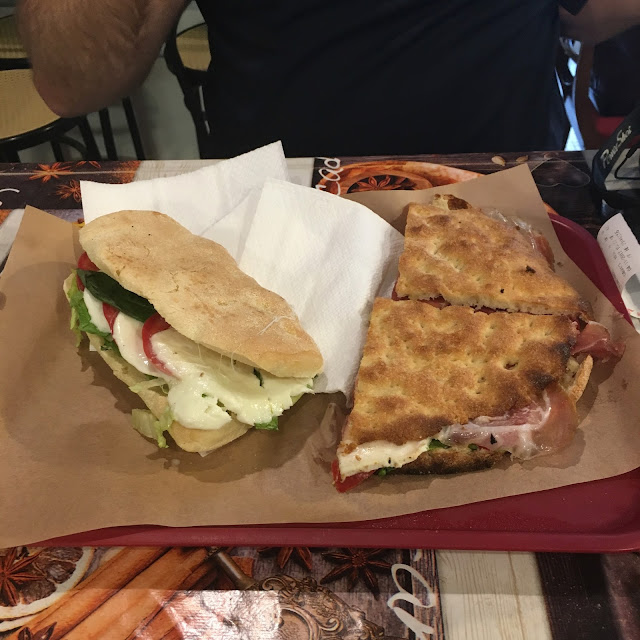 We went to the Pantheon which is a famous Roman landmark. It is a former Roman temple which is now a church. They say that this building was completed around 126 AD which absolutely blows my mind. 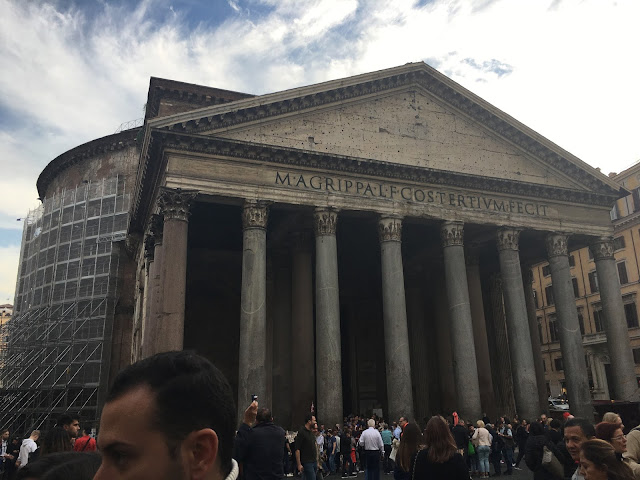 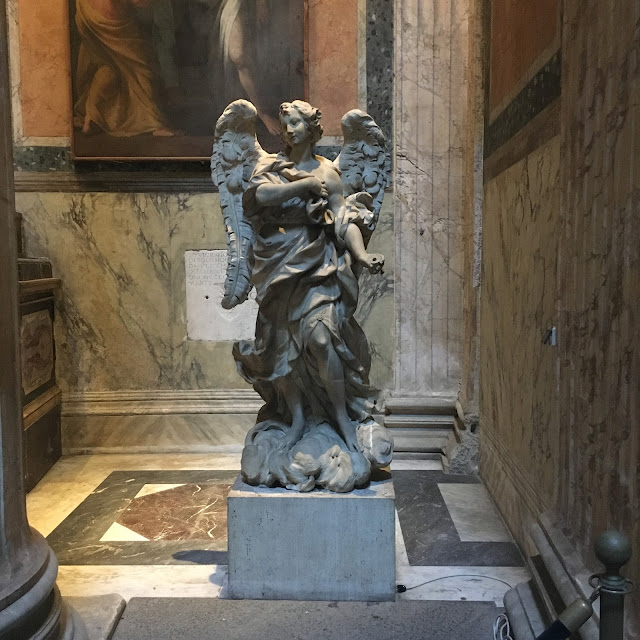 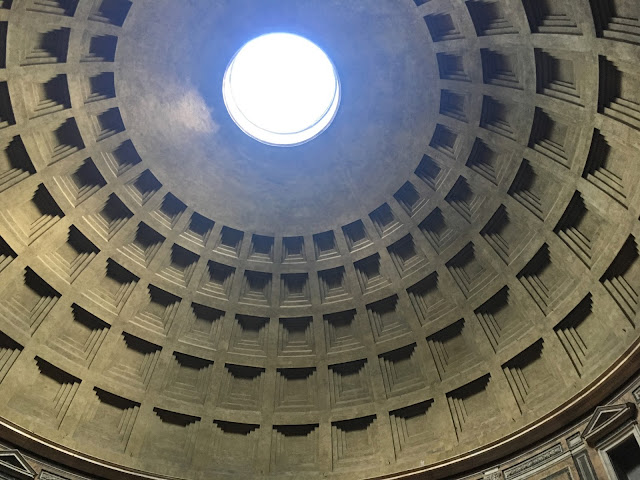 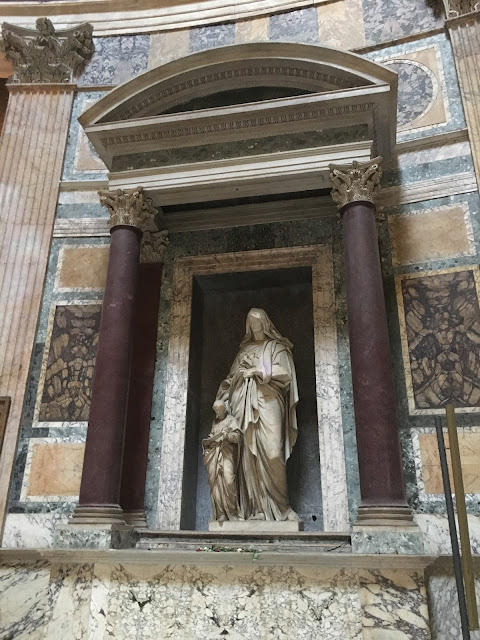 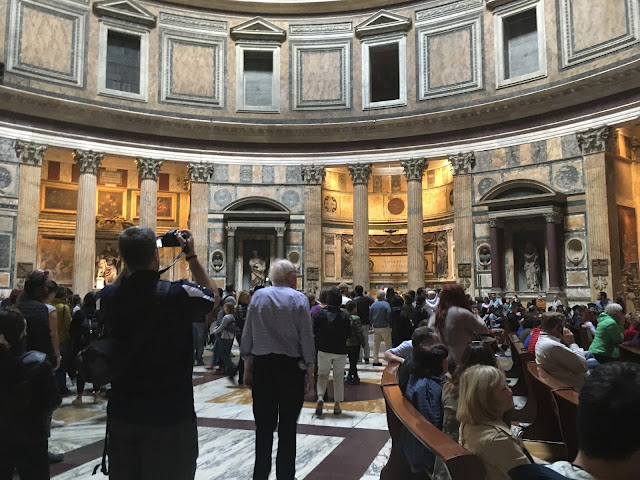 By late afternoon we had to make our way up north to Villa Borghese as I had booked us tickets in advance to go visit the Galleria Borghese. Now the husband and I are not artsy in the least, but I can appreciate history, architecture, and the amount of time and effort put into something. I also like to believe that I can appreciate beauty, whether or not it's in a building or a painting or a sculpture. We had to be there at 16:30 to collect our tickets so that we can go in by 17:00 (that was our allocated time slot), and then we had to be out by 19:00 again. We followed Monika's instructions on how to get there (even though it went against my instructions obtained via Google Maps) and we ended up only getting there at 16:55. I was nearly in tears because my legs and feet were so sore from all the walking (South Africans aren't a walking nation) and I was tired (we slept on the plane and we were up since about 4:30 am) and I was scared that they were going to refuse us entry because we were so late. But, when we got there there was a short line at the ticket counter of people who were also a bit late and in the end no one even said anything, they just made us check in our bags and coats, and off we went. I have to say, visiting the Galleria Borghese was a highlight of our trip. I can't recall the entire history now, but one of the members of the Borghese family (a Cardinal) was a big art lover and he was an early adopter of the works of Bernini and Carvaggio, ensuring their popularity in later years. As far as I understand the gallery used to be the home of the Borgheses but was later made into a gallery so that everyone could enjoy the art. Each room is decorated (elaborately!) in a different style and showcases the paintings and the statues beautifully. The statues were my favourite and the amount of detail is absolutely mind blowing. The ceilings are also artworks on their own and I spent a lot of time with my camera basically on my face, trying to capture a beautifully decorated ceiling (such as the bottom right photo in the collage below). 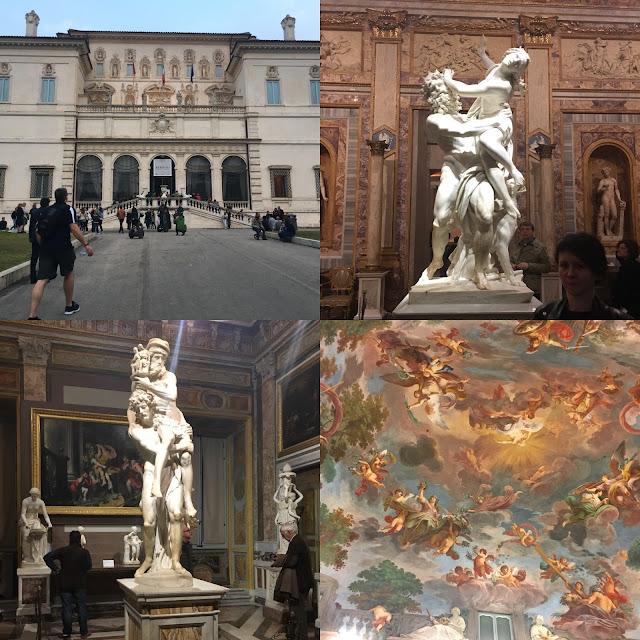 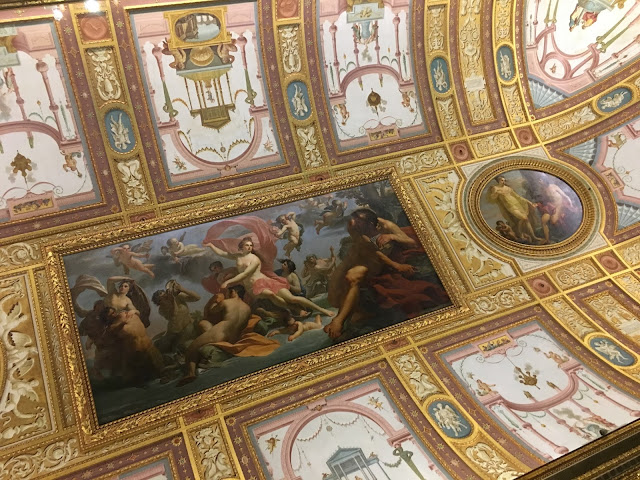 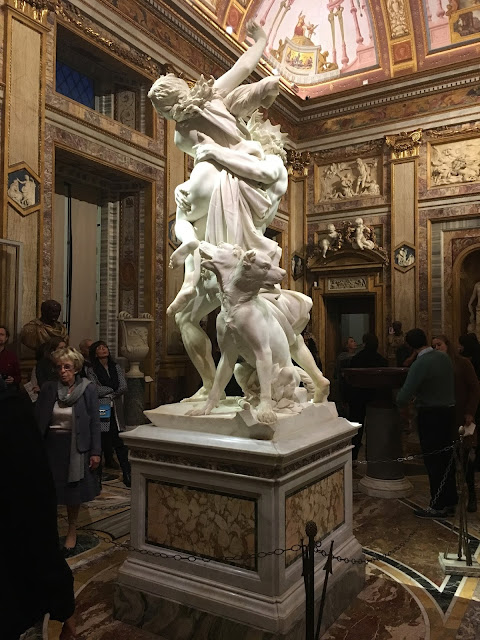 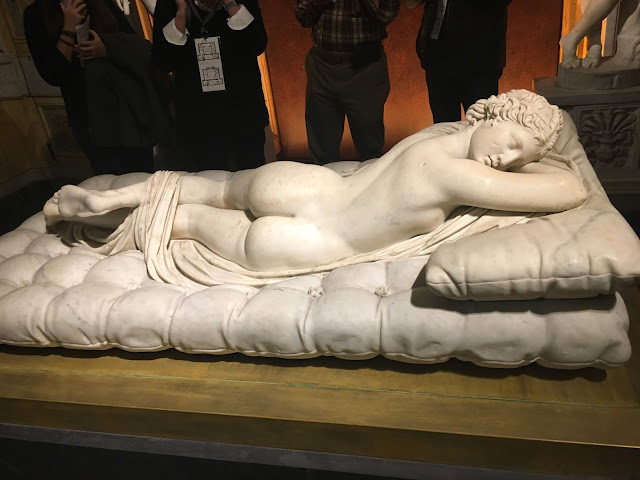 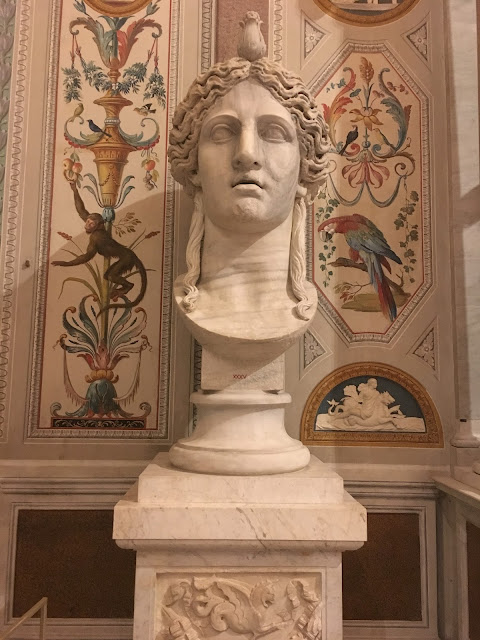 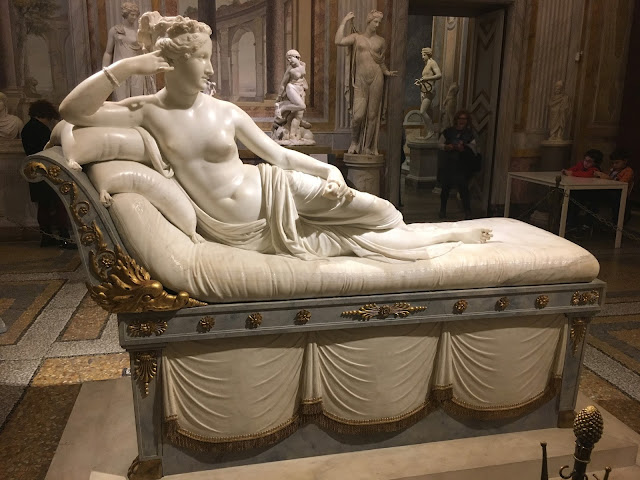 After Galleria Borghese we walked past the famous Trevi Fountain, and I must say, it's very pretty during the evening when the lights are on and the water is illuminated. We had to elbow our way in there but we got a place to sit and it was nice to just sit and take it all in. 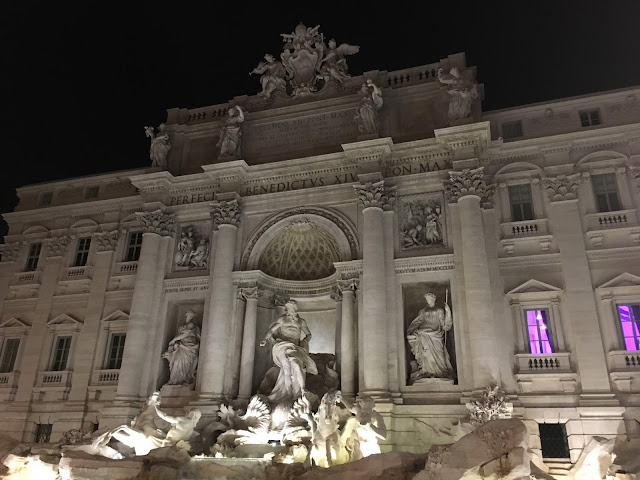 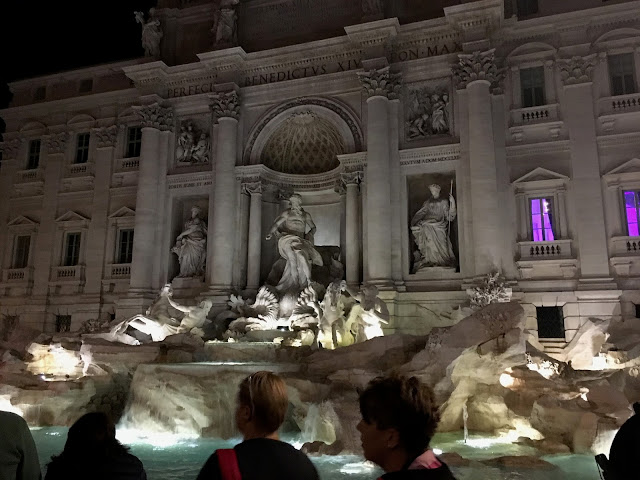 After that we went out for our first dinner, obviously pasta! After that we returned to our B&B to basically go pass out. 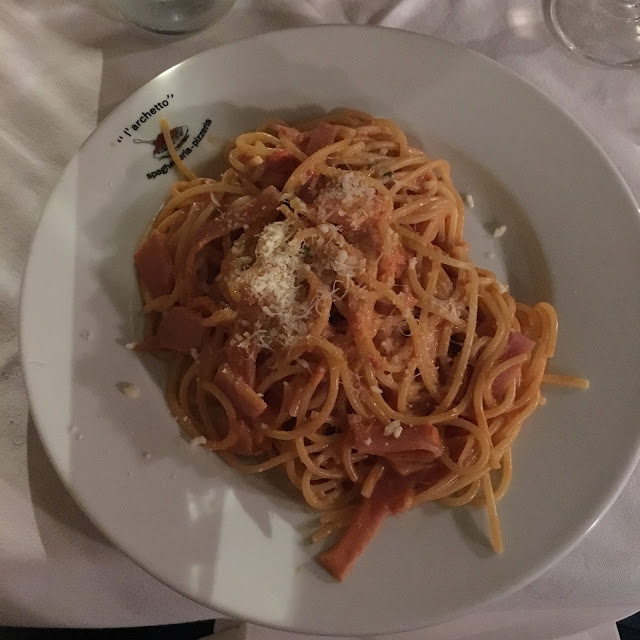 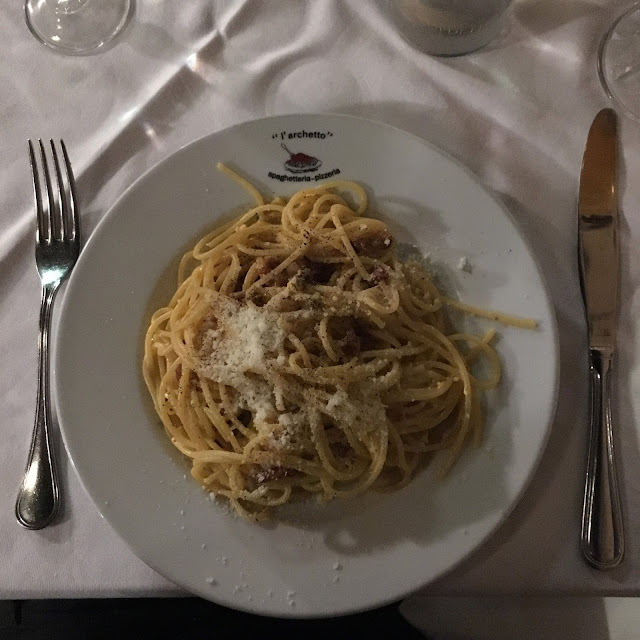 And that brings me to the end of Day 1. Initially I wanted to group the days together into a blog post, but as you can see, it'll take you forever to read (and forever to load all the photos). Please check back soon for the next instalment!