Our last day in Venice started out cloudy but the clouds soon started clearing and it starting getting warmer and warmer. We could also see that there were more tourists than the previous two days - a sign that we should get out. Venice is really small and I can't imagine what it looks like with a big influx of tourists! We had to catch a train back to Rome at lunch time so we didn't have much time to walk around. 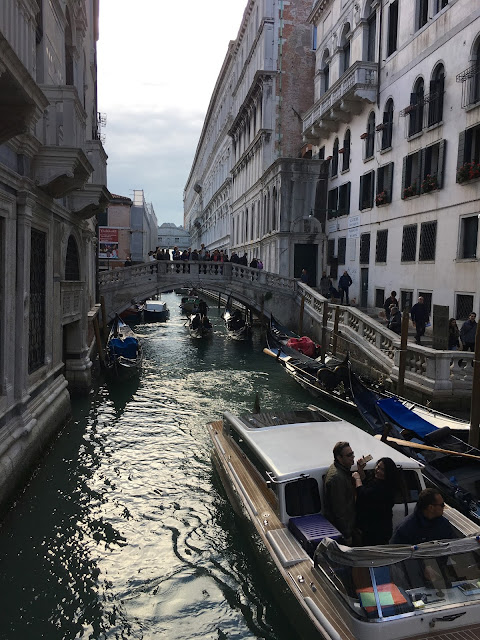 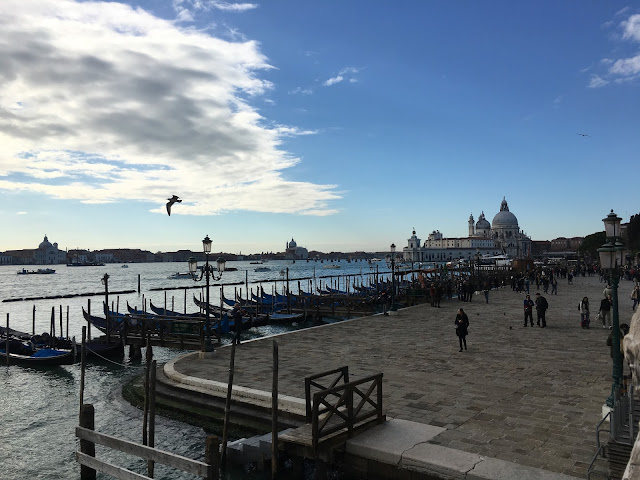 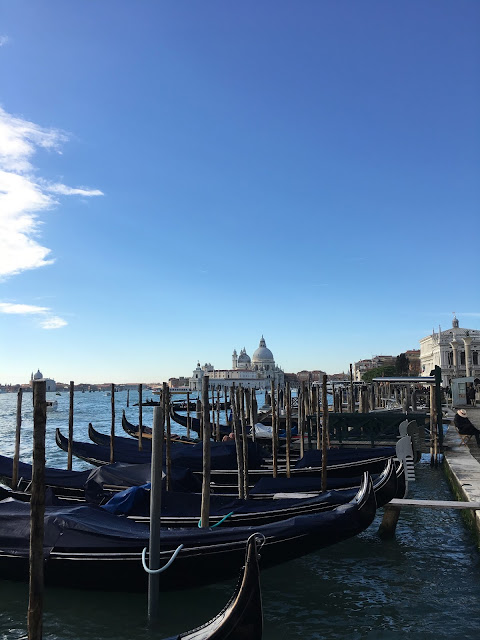 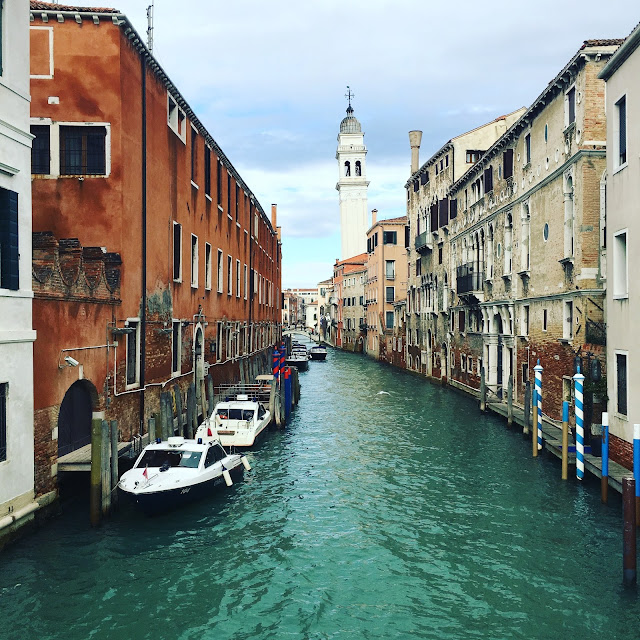 After having breakfast at the hotel and checking out (but leaving our bags there) we set out for a final wander around Venice. We went to a Kiehl's shop and I enjoyed looking at all the holiday-themed packaging, so beautiful! I ended up not buying anything, as we could get pretty much everything in SA as well (except they have different sizes of the same product which we don't get here).

We wanted to take a water taxi to a nearby church but there was a problem: the water taxi drivers were striking. A strike in Italy, however, does not mean the same as in SA: in Italy they will strike, but only on some routes, and only until 17:00. This meant that we couldn't take a water taxi from the stop closest to our hotel, we had to walk halfway around the island. This meant that our time to wander around was now also cut short. We thus went back to the hotel, got our bags, and set off on the walk around the island to the other water taxi stop. Luckily they weren't striking and we got to the train station in good time.

We ate very overpriced McDonald's meals and hopped on the train. We got to ride Premium class as the limited number of "low cost" tickets was the same price as the normal second class tickets... It took about four hours to get to Rome but the train trip went by quite quickly.

When we got to Rome it was a traffic nightmare: it was Friday afternoon in a big city and everyone was trying to recover from the bus driver strike that day. Apparently they only strike until 17:00, but after that everything is late. Also, everyone seem to flock to Rome over weekends so that also contributed to the hustle and bustle. It took us hours to take the right busses to get to our guesthouse which was 200m south of the Vatican. From our last bus stop to the guesthouse was quite a walk and we weren't sure if we were going in the right direction. We approached a tall unassuming building and a friendly man walked towards us, introducing himself as the guesthouse owner. I was so relieved I wanted to hug him! He took our suitcases and showed us inside. He was so sweet and friendly and he immediately made us feel at home.

The guesthouse itself was beautifully decorated and we had an entire suite to ourselves: a lovely bedroom, a bathroom with a toilet, teeny tiny bath with a shower head, and a washbasin, and another bathroom with a large jacuzzi bath. 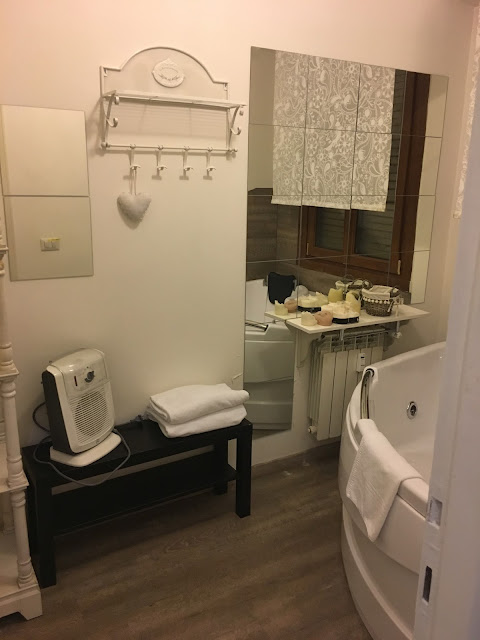 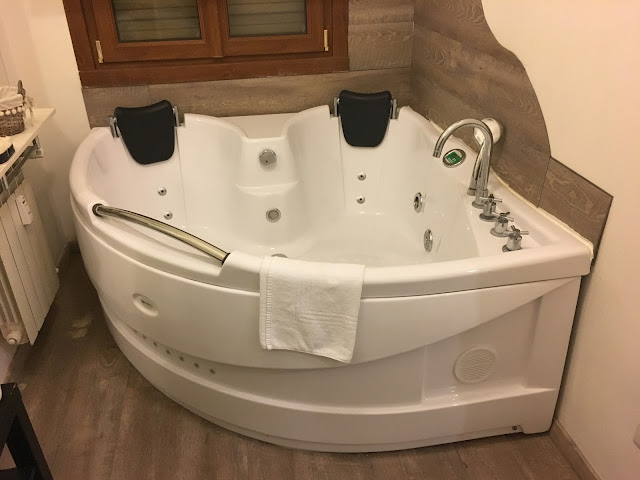 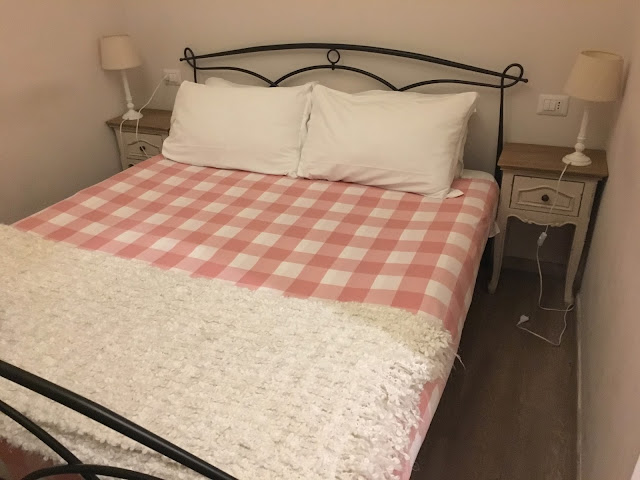 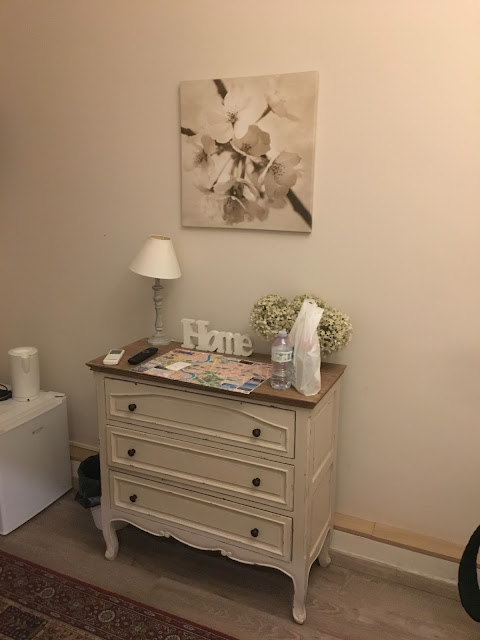 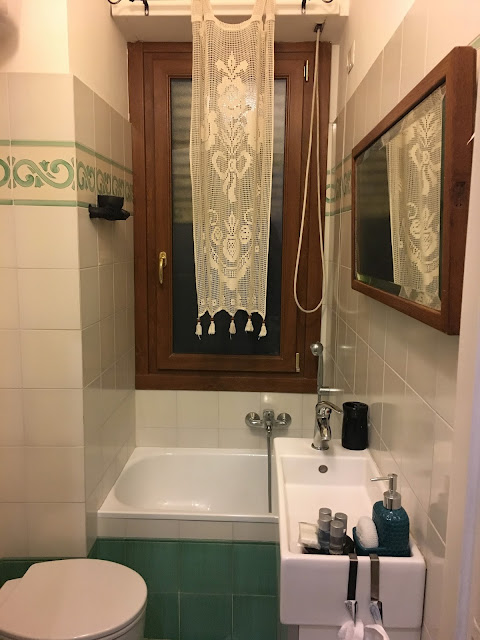 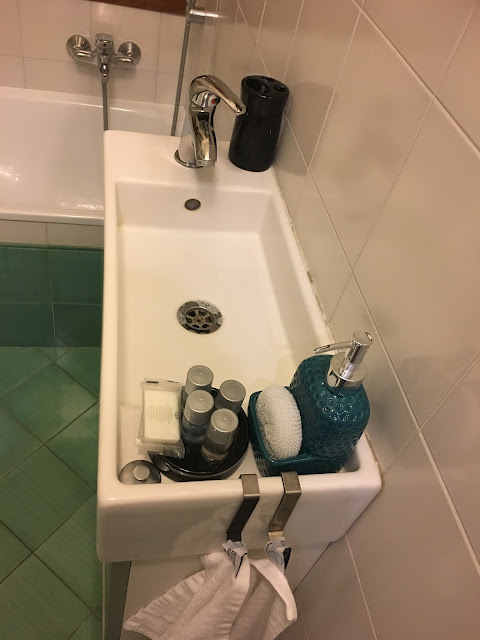 After checking in we asked our host if there are any nice places to go to dinner. It was our fifth wedding anniversary, after all! Our host told us to go to Giggetto as it served proper Roman cuisine, not Italian cuisine. We weren't sure what the difference was, but we were up for something different! 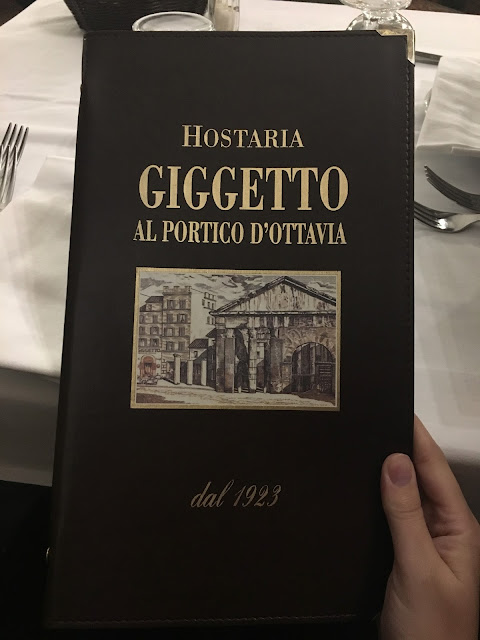 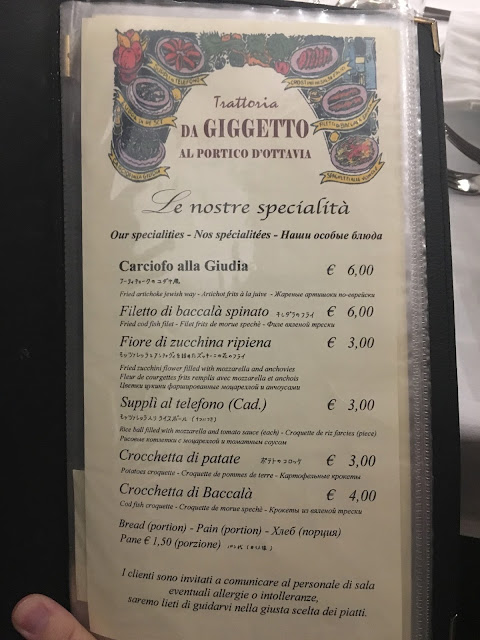 I read online that grilled artichoke is a Roman speciality so I knew to look out for that on the menu. We ordered grilled artichokes and baby marrow flower stuffed with cheese as a starter. For mains the husband ordered carbonara which looked incredible and I ordered saltimbocca, which I also read was a speciality. It's supposed to be veal wrapped or lined with prosciutto and sage that is marinated in either wine or saltwater (depending on the region). My veal didn't have prosciutto but it was floating in a bath of saltwater. It wasn't a very nice meal (I didn't even feel like photographing it) and I had a bit of order envy about my husband's plate of food. 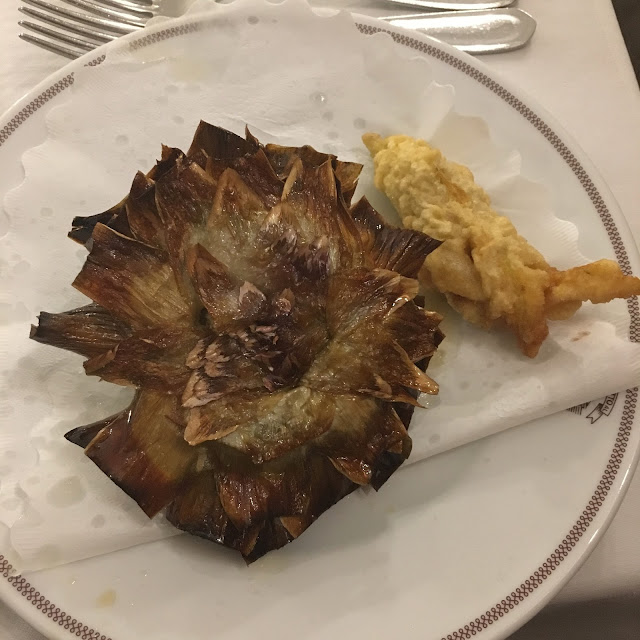 For dessert the husband had tiramisu and I had a cheesecake type thing: a yoghurt and berry torte. It was delicious and all but made up for the disappointing main course. 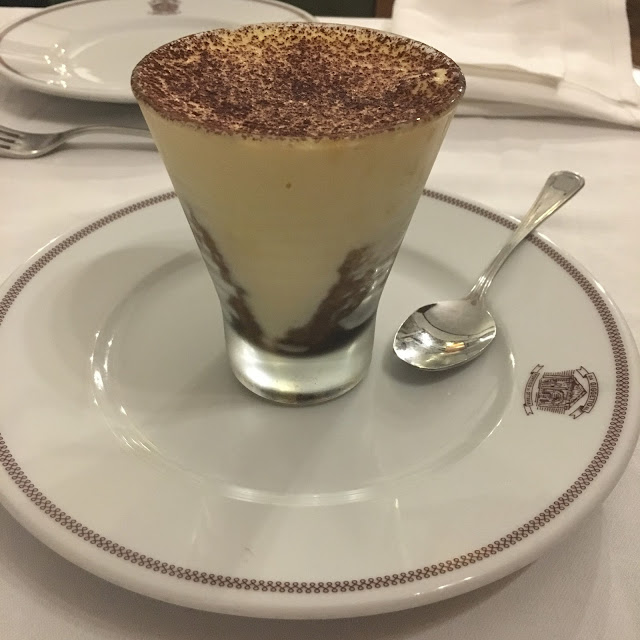 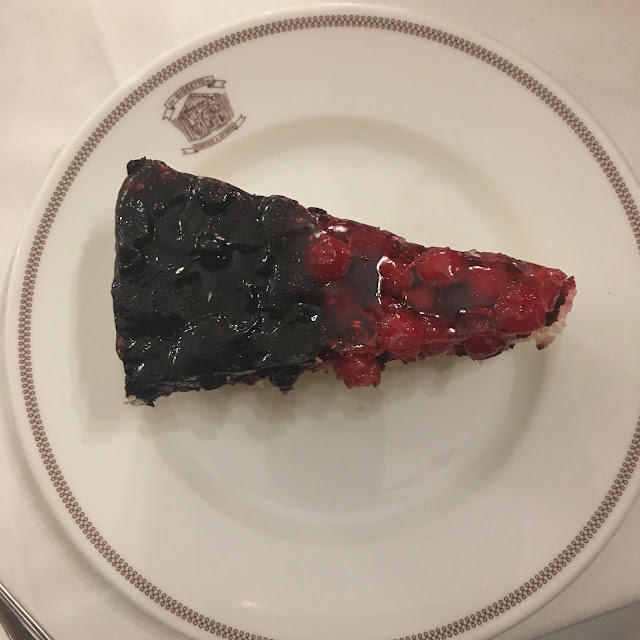 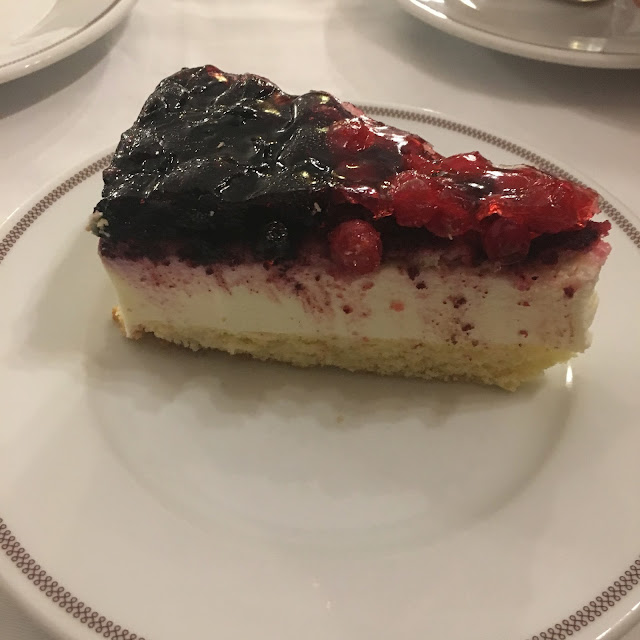 After dinner we went back to the guesthouse and made use of the jacuzzi bath. I wouldn't mind having one at home!

This was the end of day seven in Italy. There is one more post left in this travel series, please check back in soon to read it.