I was ill a lot during the last quarter of 2018 and one day when I was in bed, again, booked off sick, I decided to download Netflix and open an account. I mean, if you can't lie in bed on your sick days and watch Netflix, then when can you? I asked on Instagram stories (if you don't follow me yet, my handle is @hildegarde_k, same as on Twitter) for recommendations and I got a lot of good stuff! While looking for these titles on Netflix and scrolling through the offerings, I found a lot of other series as well. This extremely non-beauty, non-travel post list the shows I've been enjoying most. Who knows, you might find something here you like.

Two things I like about Netflix original shows (in particular) is that they're fresh and new in their themes, characters, storylines, and they make you think. Some of the series are also only one season which means that the storylines aren't drawn out until infinity (I'm looking at you, Grey's Anatomy).

Shows That I Would Recommend (Thus Far) 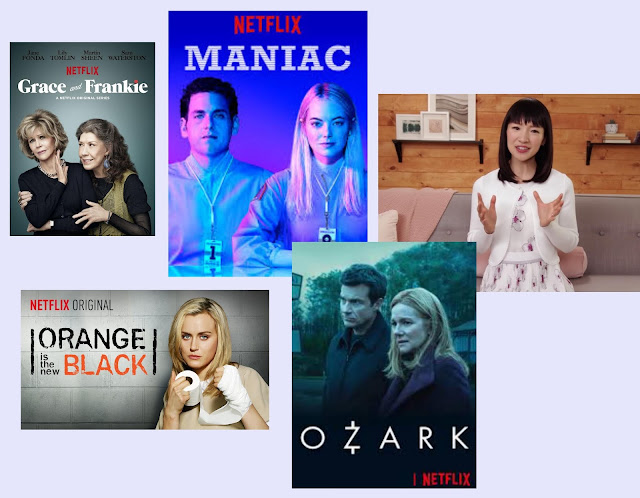 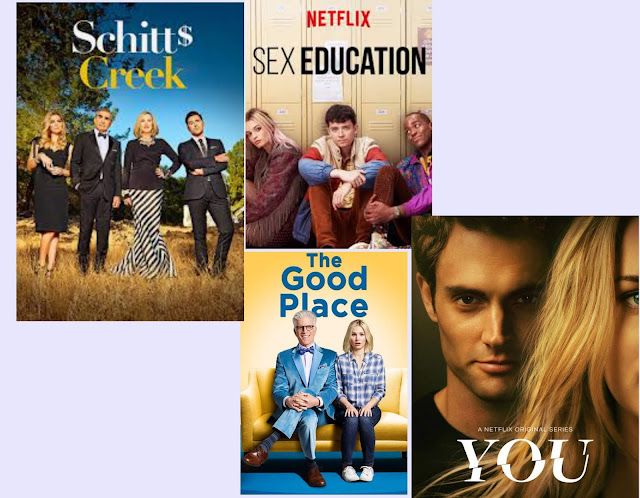 One of the first Netflix show I watched was Maniac starring Emma Stone, Jonah Hill, Justin Theroux, and Sally Fields. It's a quirky series about two struggling strangers who both enter a drug trial for a dodgy new pharmaceutical. The doctor in charge of the drug trial has problems of his own as well as serious mommy issues, not to mention an emotionally complex computer. It's off-beat and not your typical predictable TV series which is probably why I enjoyed it so much. The show focusses on deep and meaningful issues but there is also plenty of humor.

Ozark is quite a dark show and if you liked Breaking Bad, you're going to like this. Financial advisor Marty Byrd moves his family from Chicago to the Missouri Ozarks to launder money for a Mexican drug cartel. In a bid to save the life of his family he promises to launder $500 million in 5 years' time. Just like Breaking Bad kind of taught us how to cook meth, Ozark teaches us how to launder money. I still don't completely understand all the processes, but it's not something I would want to get into. The series also focusses on family issues to a lesser degree and most of the other characters are also equally messed up, from the gay FBI agent to the druggie lodge owner to the farming couple with their secret business.

On the other end of the spectrum we have The Good Place. I've heard lots of conflicting reviews on it but I personally love it. The show stars the charming silver fox Ted Danson and Kristen Bell. Kristen Bell's role is much more Jeannie Van Der Hooven from House Of Lies than it is Veronica Mars. Kristen plays the role of Eleanor Shellstrop who dies and wrongly ends up at The Good Place instead of The Real Eleanor. Ted Danson is Michael, the keeper of the neighbourhood in The Good Place. Tip: if you start off watching it and think it's a bit weird, give it a chance. There's a nice little twist at the end of the first season that's bound to have you coming back for more. What I love about the show is the fact that it's unpredictable and that they manage to write an entire show about heaven and hell without calling it that and without bringing religion into it whatsoever. I can't wait for the next season!

If you're looking for a hilarious comedy, look no further than Schitts Creek. The extremely wealthy Rose family fall onto hard times and are court-ordered to go live in a town, Schitts Creek, that Mr Rose bought for his son as a joke years ago. They have to stay in the town's motel and try to adapt to small-town living. Hilarity ensues. One of my favourite characters has to be the son, David, who is pansexual (Roland Schitt, "Pansexual? Does he have a pan fetish?"). I love researching series I am watching and an interesting thing I found out was that Schitts Creek is a real-life family affair: the father and son team on the show are father and son in real life! They also produce the show with the help of another family member.

I started watching Orange Is The New Black years ago when it first came out so I just continued watching it on Netflix. Piper Chapman lands in jail after her involvement in a drug ring comes to light. The woman she was in a relationship with at the time lands in jail beside her. The show focusses on different characters and why they landed in jail, as well as their relationships in jail itself. I've always loved prison stories (hello, Prisoner: Cell Block H and Prison Break seasons 1-2), so there was never any doubt that I would like this!

Another comedy worth mentioning is Grace and Frankie. This isn't my absolute favourite thing I've watched on Netflix, but it is watchable. The star-studded cast include Jane Fonda, Lily Tomlin, Martin Sheen, and Sam Waterston. Grace and Frankie find out that their respective spouses are gay and have been cheating on them (with each other) for the past 20 years. Stylish Grace and eccentric Frankie move into their joint beach house and try to make sense of everything that happened. I think I'm about 20 years too young to fully appreciate all the humor, but I like it nonetheless. The show is made a bit "younger" by the fact that both couples' adult children also frequently feature. My favourite by far is the feisty Brianna (daughter of Grace and Robert) who speaks her mind but is also absolutely hilarious and gorgeous.

One of the most talked-about shows recently is Tidying Up With Marie Kondo. Marie Kondo is a Japanese "organising consultant" who has written numerous books about the subject, most notably her best-seller "The life-changing magic of tidying up". I read the book a few years ago and instead of inspired, I felt overwhelmed and bleak. The book comes across as very rigid and judge-y: throw away your possessions or else! But, this is not a book review, it's a TV show review! I find the series to be much more relatable and doable. After episode two I was ready to #KonMari my house! On the show she visits a different family in each episode and helps them to declutter their homes. She shows them what to do and then leaves them with their "homework" until the next week. The only problem I have with this method is that it relies on you having drawers to put your clothes in, while I (and most of us, I'm gathering) have shelves. That being said, I already KonMari-ed Olivia's clothes in her dresser and I couldn't be more chuffed! There's a lot of divided opinions on the show (my husband doesn't understand how I can watch something "so boring") but I personally really enjoy it as I've always loved anything to do with organisation.

The last two shows are the ones I've finished most recently. Sex Education is an absolutely brilliant British show (featuring the American actress Gillian Anderson of The X Files) about teenage sex and all the issues around it. It not only focusses on sex, but also on relationships between parents and children, relationships between friends, and relationships that the children have with themselves. Awkward teenager Otis lives with his mom who is a renowned sex therapist and his best friend Eric is gay and struggling with his own issues. Otis befriends alternative rock chick Maeve and they open a "sex-therapy clinic" at school where they charge their fellow students money for advice provided by Otis. The show is set in an 80s flashback and, apart from the great content, the scenery is breathtaking. Apparently the show was filmed in the northeastern part of Wales (note to self: book tickets to Wales).

Lastly is You, the show that's been on everyone's lips these past few weeks. Penn Badgley from Gossip Girl stars in this psychological thriller about a brilliant bookstore manager who falls in love with an aspiring writer and student. He stalks her and tries to insert himself into her life at any chance he gets. He believes he loves her and would do anything to protect her- with dire consequences for anyone who tries to come between them. I really, really enjoyed this show because I enjoy thrillers, the story was very exciting and unpredictable (I didn't read the books), but it also made me question my own morals and ethics. Joe is clearly the bad guy, but often I found myself rooting for him. And the leading lady, Beck, really worked on my nerves. I don't like her character at all. There are quite a couple of crazies in this show, be warned. I finished the series just as I was busy writing this post, and oh my goodness, what an ending! It wasn't the ending I had hoped for ór expected and now I don't know how to feel about it. Hopefully the second season will clear things up.

Other shows that I'm busy watching with the husband are Narcos and Godless. Both received excellent rating but I'm struggling to get into them. Narcos is very good but it's dark and there are a lot of subtitles, which makes it difficult to do anything else while watching (eating, playing on my phone *ahem*). Narcos documents the rise and reign of Pablo Escobar's cocaine trade in Colombia and it's very interesting to see how and where it all started.

Godless is a short one-season show but the episodes are very long and I find that I lose interest after a few minutes. It's a western but there are a lot of characters and I find it confusing. Some parts are very watchable but currently I'm just watching it to finish it. 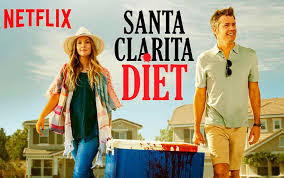 I heard average-to-good things about Santa Clarita Diet, and because Drew Barrymore stars in it (what a babe!) I decided to watch it. Now, you have to know this about me: I have issues with starting something and not finishing it. I have to really dislike a TV show to stop after a season or three (case in point: I watched all six seasons of Desperate Housewives even though I only really enjoyed the first few. I stopped watching Prison Break after they broke out of prison, I mean, wasn't that the point?). So I gave Santa Clarita Diet three episodes chance and I honestly don't like it. I love Drew Barrymore and it is quite funny, but I found the whole blood and flesh-eating thing gross. Plus, I'm scared of zombies (even though I watch and enjoy The Walking Dead).

And that's my Netflix picks thus far! Do you have any recommendations of what I should watch next? Please leave your suggestions in the comment section.