Time is really flying by now and I'm starting to slowly but surely freak out. I'm more than three quarters of the way there and reality is sinking in: in a couple of weeks (5!) I'll be a mom, ahhhh! A lot has happened in these past few weeks so I'm going to try and remember everything... 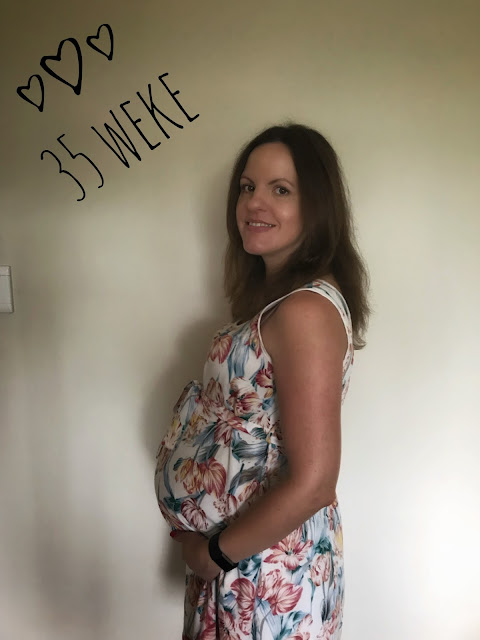 My birthday was on the first of February and my mother and youngest brother decided to do a road trip from Cape Town to Pretoria for my birthday. It was so cool having them here! My amazing friends also threw me a surprise baby shower on the Saturday just after my birthday so that my mom could also be there. I was one day short of 32 weeks along on my baby shower and I was sporting a very round bump, but I wasn't so big that I got tired easily. The baby shower was held at Ginger Apple (full name Ginger Apple Cafe & Culinary Architects) in Moreleta Park, Pretoria. I loved having my close friends and my mom with me, it really was a special morning! 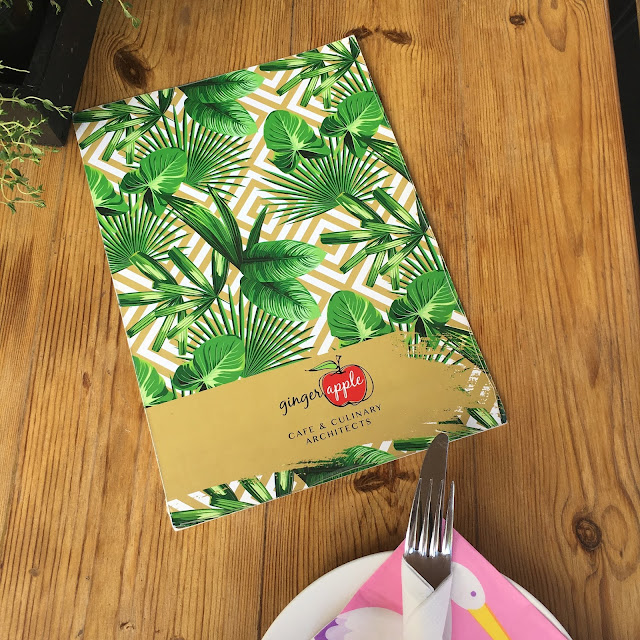 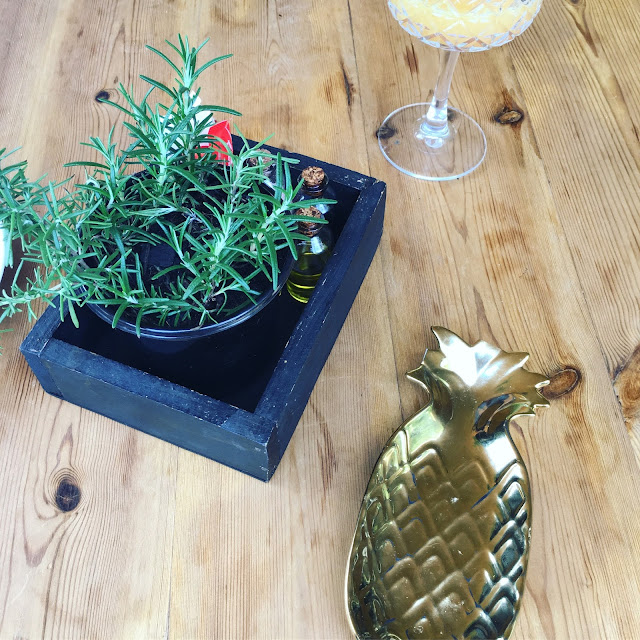 We played three games which I thoroughly enjoyed even though I didn't win any at my own baby shower... For the first game everyone got a bunch of teeny tiny plastic dummies. We weren't allowed to say the words "baby" or "baba": if you were caught saying it the person accusing you could demand that you hand over a dummy. The person who had the most dummies at the end of the party won a prize. For the second game I had to go around the tables with a ball of string and a pair of scissors. Everyone had to eye my bump (no measuring!) and then decide how long the piece of string should be to go around my bump. The person who got the closest to my actual measurements won a prize. The last game included 11 baby-related items thrown into a fabric bag. You were allowed to rummage through the bag all you want, but without taking a peek. You then had to write down what you felt (rubber ducky, dummy, Baby-on-board sticker, etcetera). The person who could correctly identify all 11 items then won a prize. 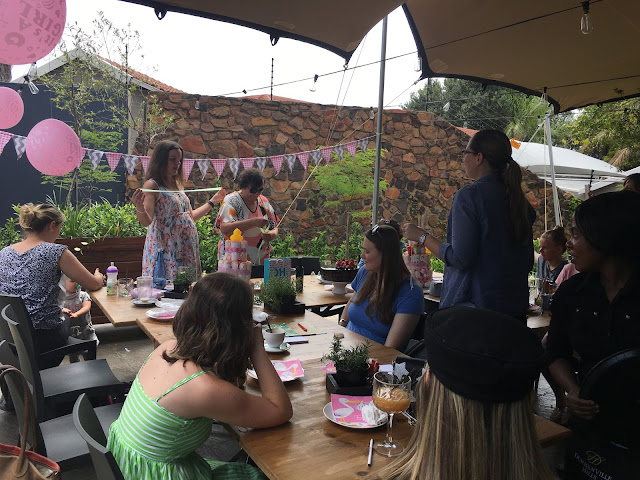 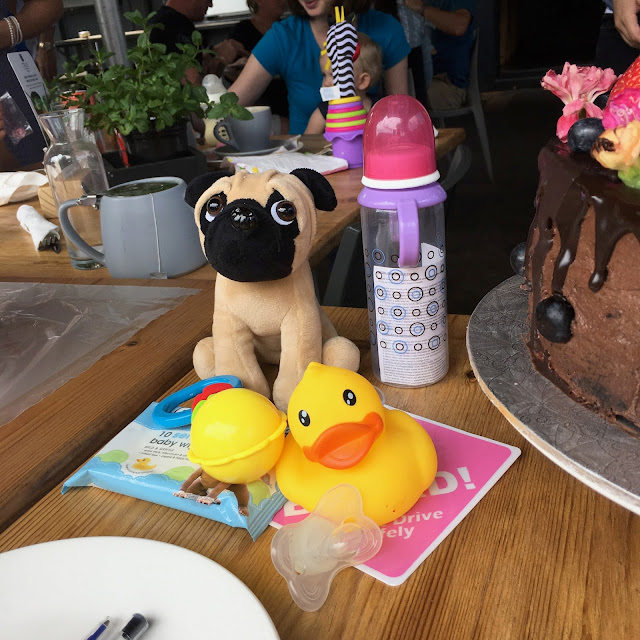 We had breakfast and the most amazing cake, also baked by Ginger Apple. I got to take the leftovers home and the boys were also very happy to have a slice or two! I got spoilt rotten with beautiful gifts and I also got to take home the contents of the mystery bag, as well as two cute "diaper cakes" made by my very talented friend, Natasha (who also organised the baby shower). 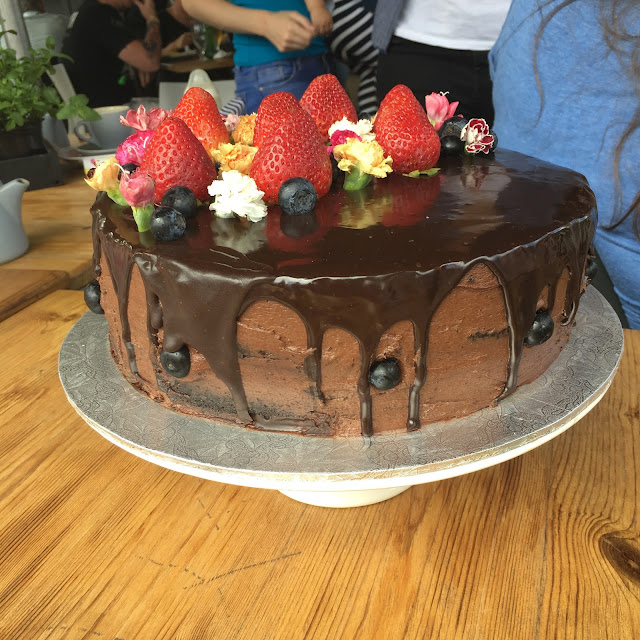 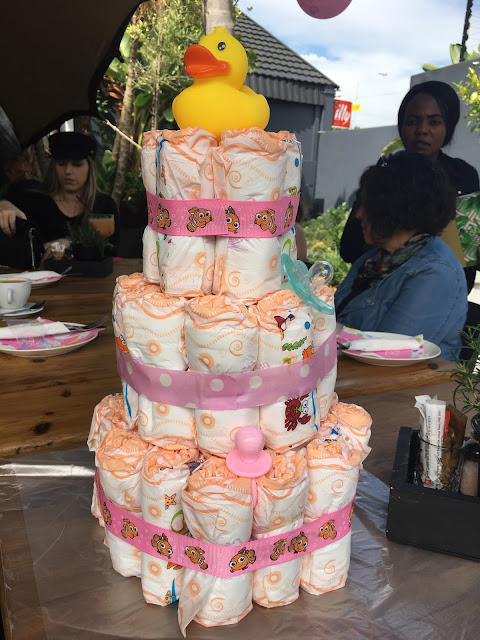 After my mom and brother left for Cape Town again, it was time to work on the nursery. I had gotten very antsy about how little time was left so I was very relieved when we finally got it together. My husband assembled the cot and we purchased a cot mattress and a small chest of drawers. The chest of drawers isn't the best of quality nor is it exactly what I wanted, but we were pressed for time and the price was ok. We bought a changing mattress to put on top of the chest of drawers, and the husband is currently building a wooden frame to put between the two so that the mattress doesn't slide off of the chest of drawers. We also looked around for a big and comfy chair that suited the room but was also in our budget (some of these chairs are ridiculously expensive!). We managed to go pick up the chair last weekend and it, together with the rug, makes a huge difference in the room. I bought a very cheerful (and cheap!) rug at Mr Price Home. I couldn't believe my luck when I saw the huge mat on the "Priced to go" shelf! I'm just sharing snapshots of the nursery here, I plan to do a full nursery tour later when we're completely finished (if that happens in time!). 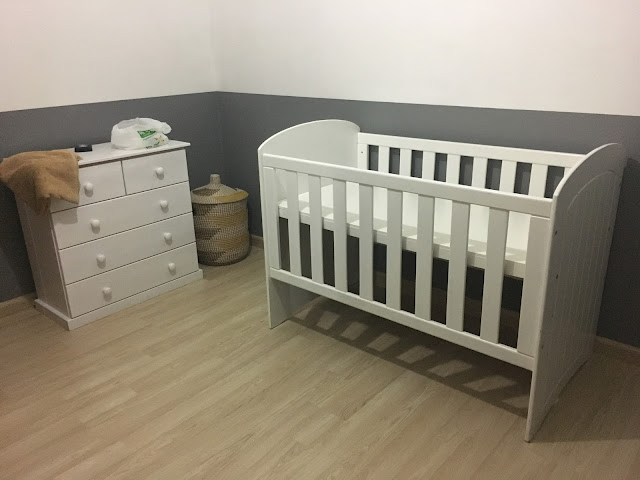 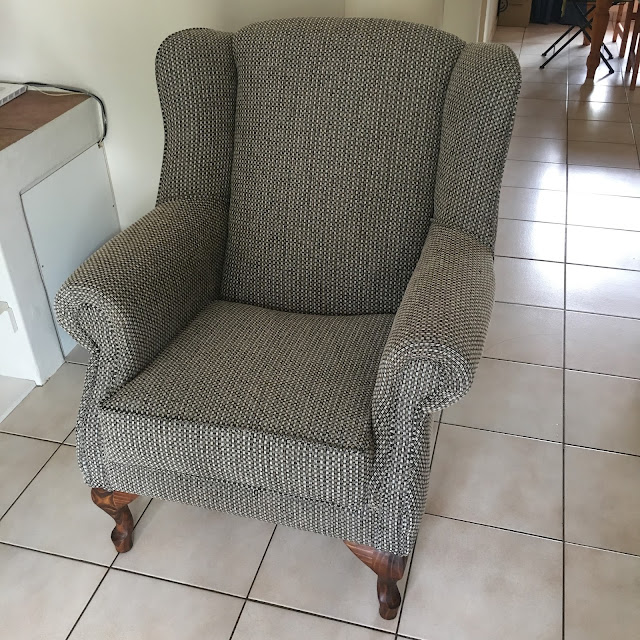 I washed all of Olive's clothes, bedding, towels, you name it. What a mission! I decided to sort the items according to colour (whites with whites, yellows with yellows, etcetera) and it feels like it took forever to dry! Someone told me that baby clothes are supposed to hang outside in the sunshine to kill any lurking bacteria, but after about the third load of washing I just decided, you know what, these clothes have never been worn, I think it'll be ok just this once. At least I'm washing everything?!

At 34 weeks we had a maternity shoot at the Harmonie Protea Farm just outside Rayton (on the way to Cullinan). Initially I didn't want to do a maternity shoot but then my reluctance turned into FOMO and I decided to go for it. I didn't want to make a big deal out of it or to pose with my bump exposed for the world to see, I just wanted a few nice, professional pictures of me, my husband, and the bump to look back on. The protea farm was absolutely stunning and I even got to take home a bunch of proteas and fynbos. I can't wait for the photos! Hopefully they'll be ready in time for my next (and probably last, eek!) pregnancy update post. 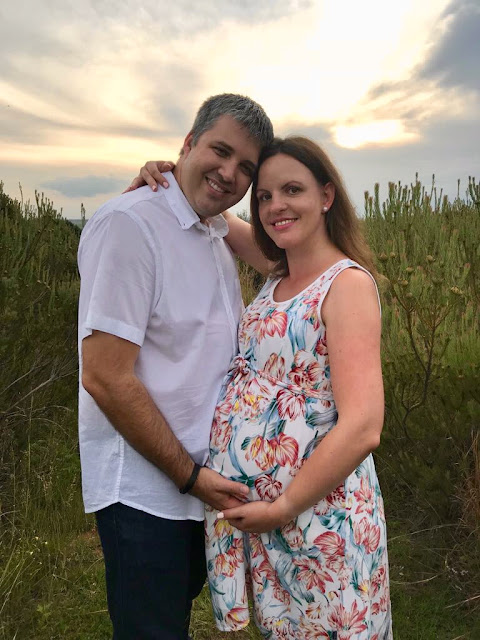 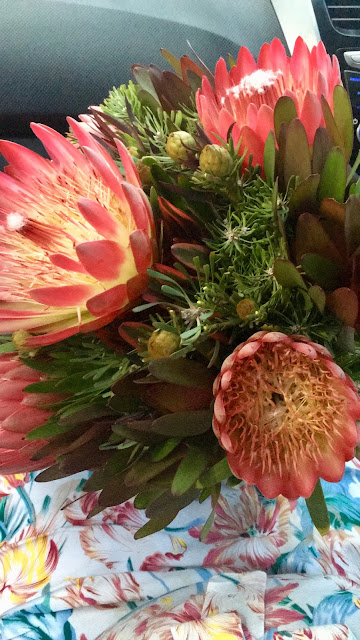 I've also started packing our hospital bags, although I think I've packed it about twice now. I keep on forgetting what's already in the bag and then I have to take everything out and start again! I do have a list, but the list doesn't distinguish between things I have and things I've already packed in... I'm also not entirely sure what to pack in my baby's bag, so I'm packing what I think is right and then I'll wait for our hospital tour on the 11th of March.

As for me, I'm starting to feel really uncomfortable now. I know I'm growing a human, but I feel so useless at times. I can't pick up stuff (bending down is now really getting tough), I get tired easily, and everyone keeps telling me to "sit down" and "take it easy". I have a total of seven outfits that fit me and I'm wearing these outfits to work and over the weekends. I'm actually enjoying having so few options, I've found that it makes getting dressed in the mornings easier! Having seven fixed outfits (five dresses, two pairs of leggings, and two maternity T-shirts) really takes the guesswork out of getting dressed!

I'm sleeping ok, it's just a pain turning over from the one side to the other. I'm not the most peaceful sleeper and I have to turn regularly otherwise my body gets achy and sore. That being said, I sometimes struggle with aching legs. I sometimes get leg cramps but my doctor told me that I can take Slow Mag at night and that keeps the cramps away, but it doesn't always help for the leg pains. It's like my legs get sore from sleeping in one position too long, although I can't imagine that that's true. Anyone else experience this? I wake up in the middle of the night from the pain and then I flex my legs (sometimes it's just the one leg) and point my toes and go back to sleep. When I wake up the pain is usually gone. So random!

My biggest issues at the moment, however, are heat-related: I'm dying from heat (even though it's cool outside) and from heartburn! It's become a running joke at work and people laugh when I tell them we sleep with the fan on almost every night now... My poor husband dives under the duvet while I sleep on top (usually it's the other way round).  My fingers and ankles are also swollen - I can't wear my rings and I can't wear sneakers or any other closed shoes. So with my seven outfits I have a total of two pairs of shoes to wear with it, oh well.

As for the baby: Olive is growing nicely and she's kicking up a storm! She turned head-down in the past month, now we're just waiting for her to flip over so that she is facing my back, which is the optimal position to deliver in. Apparently there is enough fluid for her to turn, and she's very active, so I am confident that she'll flip over in time.

That's my 31-35 week update! If you're still reading, thanks for sticking it out! Do you have any tips for me at this stage? And must-have items for the hospital bags? Let me know!