For those of you who don't know, I'm expecting my first child in March/April 2018. I posted a picture on Instagram announcing the news (you can see it here). I've been following Fleur de Force's vlogs on both her channels (here and here), and I thought the idea of doing a monthly pregnancy update is quite cool. I won't do them too regularly, though, as this is a beauty blog and most of you (if not all) are here for the beauty stuff and not for the pregnancy stuff. That being said, I do feel that it's important for the blog to grow along with me (so to speak).

I though I'd fill you in on stuff that's been happening and changing in the past 16 weeks. If there's anything else you'd like to know, please feel free to ask! 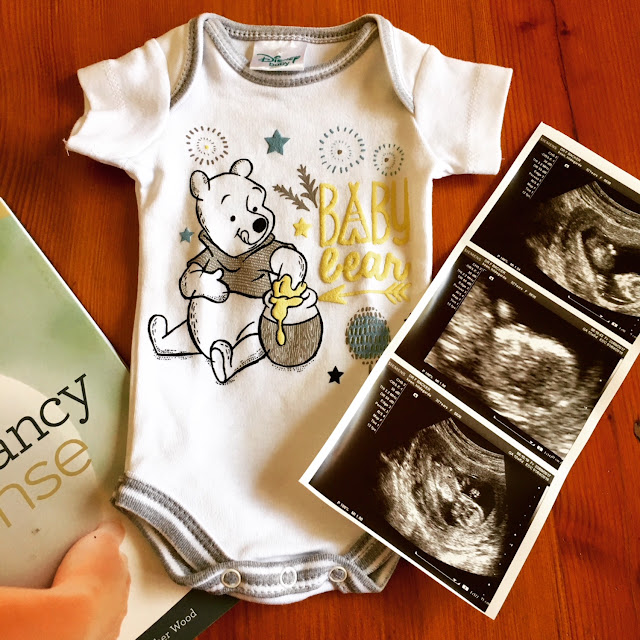 As far as symptoms are concerned, I am really lucky in that I didn't have morning sickness. I did feel nauseous a couple of times, but it never went further than that. I did/do have a couple of weird and interesting symptoms (stuffy nose and cold symptoms, dizziness, etcetera), but nothing I can't handle.   The past week I've also been down with a weird morning-only tummy bug, but that's luckily over now. Now we're on to flu symptoms (my throat doesn't hurt and my nose is only stuffy sometimes, but my body aches, especially my legs).

I've had to give up a lot of things that I like, but I know that it will be all worth it in the end. The worst part was giving up sushi. I still dream about the taste of raw salmon, but oh well. I've tried vegetable sushi a few times, but it's just too boring and bland for me. I also had to give up eating my meat medium-rare as well as cold meats and squishy cheeses such as Camembert and Brie. Giving up alcohol wasn't too bad, but I do miss the occasional glass of wine: an ice cold glass of Chardonnay or a glass of smoky, woody red wine. As for coffee: the past few years I've cut back on coffee so that I only drank two (strong black) cups a day. My doctor said I'm allowed one regular cup of coffee or two cups of decaf per day, and I find that I don't really miss it that much. I'll have a cup of Nespresso decaf at home, especially over the weekends, and otherwise I keep my daily coffee quota for when I'm drinking coffee with a friend. I've also had to up my intake of fluids. I always joke that I'm a camel and that I can get away with drinking the minimum amount of fluids, but I find myself drinking in the order of two liters of fluids a day, which is way more than I am used to!

I normally try to eat healthily, but I've really had to up my intake of fruit, veggies, and calcium. I try not to stress about what I'm eating and how much of it I'm eating, I just try to eat as much as I can (within reason) and stay away from the foods on the "bad" list. I didn't really pick up weight in the first 12 weeks, which worried me a bit, but the doctor said that as long as the baby is doing ok (measuring the right length for his/her age, etcetera), it's fine. That being said, I've picked up 2 kg since that appointment so I think I'll be ok!

I've had the usual body changes that come with pregnancy, and more or less in week 13 or 14 I started getting a bump. The bump appeared a little while after telling our friends and family (our parents already knew for a few weeks), so it wasn't such an issue to hide it. The bump seems to be picking up speed now as I can literally see a change during the past week! I haven't been able to wear my jeans for about six weeks now (it still fits, but when I sit down it chokes my tummy), but I actually found a pair of boyfriend jeans in my cupboard that was a bit too big and now fits comfortably. I've also had to invest in a couple of bigger tops to accommodate the growing bump. I bought a few bigger, longer length tops and short dresses (that I can wear over leggings) from H&M's and Mr Price's maternity ranges and I love it. I'm also glad that it's summer so I'm practically living in maxi dresses (that I already owned).

Since I was about 10 weeks pregnant I've been religiously applying lotions and potions to all the areas that can stretch. I started with Palmer's Stretch Mark Cream and then moved on to Bio-Oil from around 14 weeks. I saw that Fleur uses Palmer's Tummy Butter so I bought that to use in-between Bio-Oil applications. I don't see any stretch marks yet (touch wood!) but it might still be early days for that, who knows. I enjoy the ritual of applying the oils and creams, especially on my tummy.

As for my skincare routine, nothing much has changed. The doctor said I should not use products that contain a high dosage of Vitamin A, but apparently I don't own any Vitamin A products, so that's fine.

My hair and nails have also started growing quicker and longer, which is a nice bonus. My nails are normally quite brittle and flaky, but now they're quite strong and grow quickly. I haven't been in the mood for painting my nails in months, but I think I need to take advantage of these new strong nails! My hair also grew quite a lot and I need to have it cut, as it's becoming a pain to dry in the mornings. I try to use a hair mask once a week to keep the ends in good condition.

Apart from "how are you feeling?" the question I get asked the most is, will you find out the gender of the baby? The husband and I discuss this regularly and, although I always said I didn't want to know, I think knowing just makes it easier to plan. People will want to buy things for the baby (so do I!) and working with a colour scheme would be nicer and easier. We have an appointment tomorrow (16 week appointment) but we said that, if we have the choice, we'd rather wait until the 20 week scan when we have our fetal assessment and fancy sonar done at the hospital.

As for Baby's room, we have already started planning and painting. We're keeping the colour scheme of the nursery gender neutral (white and grey) and then we'll have white furniture and pink or blue/navy accents (toys, blankets, wall art) depending on if the baby is a boy or a girl. This way we can start decorating now without re-painting at a later stage!

The only things we've bought so far are paint and a second hand cot. I also bought a total of one baby blanket as I don't want to buy too many things now. A part of me still thinks it's "too early" to buy things for the baby. Silly? Let me know!

I hope you enjoyed this. Please let me know in the comments section what you would like me to mention in my next pregnancy update (which will only be up in November at the earliest). I also thought about doing a maternity haul sometime, and later on a nursery tour. Let me know if you'd be interested in that?