After a four month hiatus, I'm back. Well, sort of. Four months ago I had this grand idea of starting up the blog again whenever I wanted to, but these days I can think of 100 more important things to do than to blog. I have missed blogging, though, I just don't know if I'll be able to dive right into my usual schedule of posting twice a week.

For those of you who've been following the blog for a while, I had my baby girl on the 12th of April. Now I know this isn't a mommy blog but I thought I'd share with you where I've been these past four months and what happened on THAT day.

The baby's due date was 1 April 2018 (Easter Sunday) and I hoped and prayed that she would either arrive a few days early, or very late. You see, my doctor was away on Easter Holiday and I was dead scared of having the baby while she was away. But my baby apparently enjoyed her warm and cosy home because she wouldn't budge, despite being in the optimal position to be born and laying very low for weeks. The due date came and went, my doctor returned from her holiday, Granny flew up from Cape Town because "surely she'll be here by the 6th?", and our neighbours with whom we are great friends also returned from their holiday. Still no baby. That following Tuesday when I was 41 weeks 2 days pregnant I went to the doctor and she said that the baby has to be born before the end of the week as my amniotic fluid was starting to get less and the placenta was beginning to calcify. The doctor wanted to schedule me for an induction and I asked her to please give us two more days. My induction was scheduled for Thursday the 12th of April and so I went home with a knot in my stomach as I've not heard great things about inductions. The labour pains after an induction are apparently worse than they normally would be and most inductions end up in C-sections: something I didn't want unless absolutely necessary.

The Thursday morning we arrived super early at the hospital and I was hooked up to machines measuring my heart rate, the baby's heart rate, as well as a machine that measures the strength of contractions. At 06:00 the machine started registering contractions: the baby had decided that she won't be induced, she's coming out on her own. I was so relieved that I didn't have to be induced and I was also chuckling at my headstrong little girl who decided that she'll come into this world on her own time.

The labour got progressively worse (as all labours do) but I was completely zoned out. The hours flew by and halfway during the morning I asked for an injection. I can't remember the name but it doesn't really take away the pain, it just helps you cope better. They told me that it would wear off at around 13:00 as I was very anxious that it would harm the baby (it wouldn't). At 13:15 the doctor said that I could start pushing and at 13:40 my baby was born. The baby was big, much bigger than anticipated (4.2 kg!) and the doctor had to make small cuts so that I wouldn't tear (sorry for the overshare). When Olivia Isabella was born they put her on my stomach for about 30 seconds before towelling her off, cutting the umbilical cord, and whisking her away to the other side of the birthing suite. I slowly came out of my zone and alarm bells started ringing. I know babies aren't very pretty to look at when they're born, but why is mine so swollen and purple? When they took her away I asked, "Is my baby ok?" and nobody answered me. When we discussed my birth plan weeks before the birth, the doctor convinced my husband to cut the umbilical cord himself. Their deal was that he would cut it only if everything goes according to plan (we were going to delay the cord clamping to ensure the maximum benefit for the baby). So when the doctor cut the cord within the first minute without hesitation, we knew something was wrong. Nobody spoke to me and I could sense panic. I was still too zoned out to freak out, but the next moment a nurse (an NICU nurse, I would find out later) rushed in, didn't even greet us, just took the baby in a towel and stormed out again. My baby had somehow inhaled her meconium (first poop) and it went into her lungs rendering them unable to circulate oxygen. Nobody knows for sure if it happened in utero or during the birth process, but they assured me over and over again that none of it was my fault. It's uncommon, but it does happen, usually in overdue babies.

I tried to eat something: it was 14:00 and the last time I ate something was at 05:30. The nurses encouraged me to take a shower and standing between the shower and the basin, I fainted. The shock and the lack of sustenance was just too much. I woke up in my husband's arms with the midwife checking my pulse: my husband had seen me turning pale and called out to me and when I didn't respond he knew what was going to happen and ran into the bathroom. They put me back into bed and connected me to a glucose drip to replenish my sugar levels. I wasn't allowed to shower after that... By 17:00 I still haven't seen my baby and I cried every time a nurse came to check my blood pressure and asked how my baby is doing. One nurse felt sorry for me and said she promises she'll get a porter to take me to my baby. The husband went in first and took photos of little Olivia. He showed me the photos with the disclaimer to "not freak out". I did freak out. My baby was on a ventilator and full of wires and tape and stickers. I couldn't believe that after an amazing pregnancy and a natural birth, this was how everything turned out. We went to the NICU and I cried so hard when I saw her. Everything felt very real and in that moment all I wanted to do was hold my baby. All the books talk about how important skin-to-skin contact is, especially in the first few hours, and there I was, unable to even touch my baby, let alone put her on my chest. Being discharged on the Saturday was bittersweet because I looked forward to sleeping in my own bed and using my own bathroom, but heartbroken that I had to leave my baby behind in hospital. This wasn't how things were supposed to be!

The NICU is a scary but a wonderful place. The first time you go there it's just wires and incubators and beeping, but the more I went there, the less wires I saw. The people working there are absolutely incredible. I am so fond of those nurses. Sure there were one or two who I didn't want near my baby, but the rest of them are incredible. They limit the number of visitors in the NICU (each baby is only allowed three non-parent visits, except on Sundays when it's "Grandparents Day"), but parents are allowed any time and all the time. We tried to go as much as possible but it's hard to keep up. Luckily the hospital is only a 5 minute drive from our house, but the constant back and forth really got to us after a few days.

Olivia improved remarkably as the days went by and after a few days they took her off the ventilator and eventually she cried for the first time. A hoarse sound, but it became louder and clearer as the days went by. Every day they would remove more wires and stickers and she started to look more like a baby. I felt such intense loss: yes my baby would be ok, but I mourned those missed first hours and first days that we would never get back, and, never truly recover from. After about five days I could finally hold my baby. She was so small and so different from the big swollen baby they had put on my stomach five days earlier. Breastfeeding got off to a good start and on the ninth day I slept over in the hospital so that I could breastfeed her on demand. It was so weird staying in the hospital without actually being admitted! I only had to pay for my meals (it was something ridiculous like R35 per meal) and I got tea and snacks along with the other patients. The NICU staff would phone me when it was time to feed Olivia. On day 10 they discharged Olivia and we were scared and excited to finally go home. I was relieved to be taking her home but I also felt a bit of Stockholm Syndrome towards the NICU as it had become my second home during that week and a half. 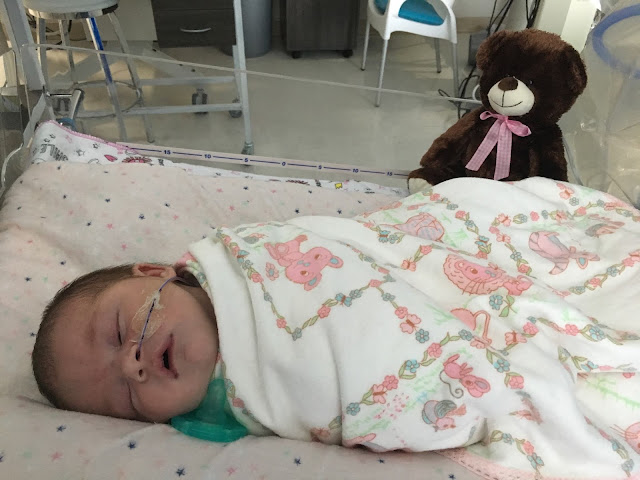 Olivia is now four months old and retains absolutely nothing from her ordeal. There is nothing wrong with her lungs, she was born with severe pneumonia. It's been a rocky road up to this day (all new parents will agree), but it's been so worthwhile. 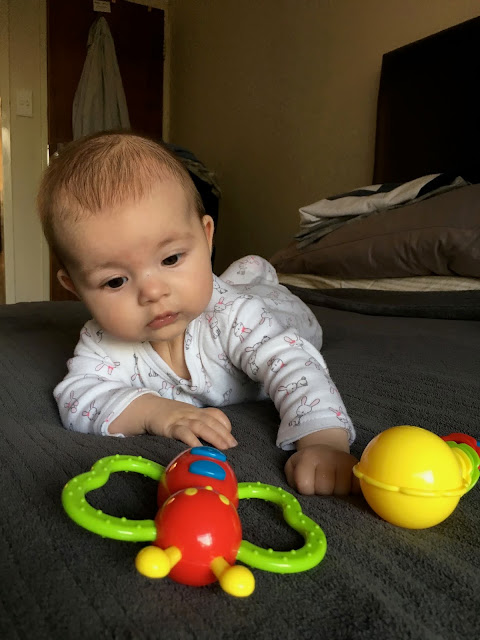 As for me: I'm in good health and everything healed perfectly. I just need to accept my new body which is a bit of a struggle, but I'm getting there. As I type this Olivia is snoozing next door (today was her second day at creche) and I'm wondering what to wear tomorrow on my first day back at work in over four months. I hope my work wardrobe still fits...